Storm blankets US Midwest in snow, creeps toward Northeast 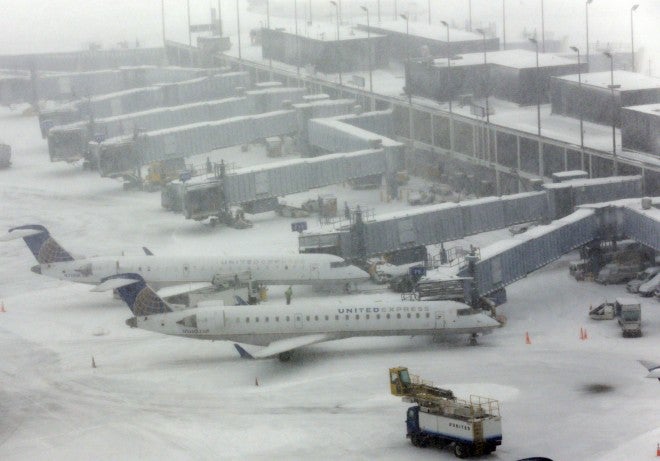 Snow blankets O’Hare International Airport, Sunday, Feb. 1, 2015, in Chicago. The first major winter storm of the year is bearing down on the Chicago region, bringing with it blizzard conditions of heavy snow and strong winds. More than 1,100 flights have been canceled at Chicago’s airports and snow-covered roads are making travel treacherous. AP

CHICAGO, United States — A slow-moving winter storm blanketed a large swath of the US Midwest in snow Sunday, forcing the cancellation of roughly 2,000 flights, making roads treacherous and forcing some people to rethink their plans to attend Super Bowl parties.

Blizzard conditions developed in Chicago — where more than a foot (30 centimeters) of snow was expected by evening — and other Midwest locales as the system slowly crept eastward into Pennsylvania and western New York state. Parts of the northeastern New England states still digging out from a storm early last week were readying for yet another round of snow to arrive Sunday and last through Monday.

The snowstorm was expected to be the most far-reaching of the season to date, stretching from Nebraska to Maine, according to the National Weather Service.

Forecasters also said the storm was moving unusually slowly, meaning accumulations of between 10 to 16 inches (25 to 40 centimeters) of snow are possible for parts of northern Illinois, Indiana and northwest Ohio. Similar amounts of snow are expected for the Northeast later Sunday and throughout Monday. 16 inches

More than 1,950 flights were canceled in the Midwest, the vast majority of which were flights in or out of Chicago’s two airports.

The winds — gusts up to 45 mph (72.4 kph) were expected in the Chicago area — made road travel tricky too. Illinois Gov. Bruce Rauner cautioned against any travel and put state agencies on alert.

In eastern Nebraska, several sections of Interstate 80 were closed Sunday due to accidents in the icy conditions.

The weather led to power outages Sunday, including roughly 18,000 ComEd customers in Illinois, most of them in suburban Chicago. The weather cut power to nearly 8,000 northern Indiana homes and businesses.

The most intense period of snow in the Midwest was expected to hit Sunday evening, meaning the roads could be treacherous for those heading to Super Bowl parties.

Several of the Chicago area’s top tourist attractions closed early Sunday because of the weather, including the Shedd Aquarium, Adler Planetarium and Brookfield Zoo.

The city’s pizzerias, though, were expecting heavy demand for deliveries during the game. And bars hosting Super Bowl parties said they wouldn’t let the weather spoil their plans.

In the southeastern Wisconsin city of New Berlin, meanwhile, sports bar Matty’s Bar & Grill was preparing for a strong turnout, despite the weather.

“Here in Wisconsin, with the snow, we’re pretty used to it,” general manager Mark Lombardo said. “Lots of folks have the big four-wheel trucks. The snow doesn’t really slow them down.”

Parts of New England — still recovering from a blizzard early last week that buried the region in snow — braced for Monday.

The weather service said that many parts of New England could get between 8 and 14 inches (20 and 35 centimeters) of snow and that parts of western Massachusetts and Connecticut could get as much as 16 inches (40 centimeters).

Boston schools were scheduled to be closed Monday.

A winter storm warning was in effect for New York City starting at 7 p.m. Sunday and was expected to remain in effect until Monday evening. Mayor Bill de Blasio said residents should be ready for a snowy and icy commute.

TAGS: Snow, US Midwest, US storm, US weather, Weather