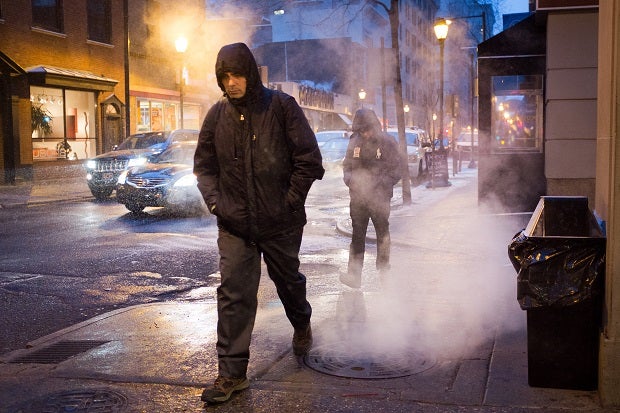 Early morning commuters make their way through rising steam along S. 16th St. near Sansom in Philadelphia on Tuesday, Jan. 6, 2015. The forecast is for light snow and dropping temperatures. AP

Frigid air was blowing across the United States, dropping temperatures in many areas into the single digits and leading weather monitors to issue wind chill advisories and politicians to plead with residents to check on their neighbors.

The blast of arctic air that’s blanketing most of the country prompted schools to close or delay openings from the Southeast to the Midwestern heartland. A National Weather Service wind chill advisory for much of the Northeast for Wednesday into Thursday warns of “dangerously cold air” with strong winds that could result in frostbite if people don’t put on their scarves, hats and gloves.

In western New York state, which is still recovering from an historic snow storm in November, a stretch of the state’s main interstate highway reopened after being shut down in both directions for more than three hours Tuesday night into Wednesday morning because of severe storms near Lake Erie.

Tuesday’s storms along the eastern shore of Lake Ontario dumped about 12 inches (30 centimeters) of snow on areas south of Buffalo.

Wind chill advisories and warnings for North Dakota and South Dakota, with the combination of arctic air and wind pushing wind chills far below freezing, led to dozens of schools either closing or delaying their opening. The weather service has posted blizzard watches for the Dakotas on Thursday.

Schools pushed back their starting times across Alabama because of the bitterly cold weather. In Tennessee, some schools that closed Wednesday planned to remain shut down on Thursday.

New York City Mayor Bill de Blasio urged people in America’s largest city to prepare for temperatures expected to drop to 9 degrees Fahrenheit (-12.8 Celsius) on Wednesday night. He reminded them to watch over neighbors and relatives who may be at risk and asked service providers to check on their clients.

In Connecticut, officials urged people in need of shelter to call the 211 hotline as the state braced for a frigid blast. A cold-weather protocol activated by Gov. Dannel P. Malloy directs state agencies to coordinate with the hotline and the network of shelters to make sure the state’s most vulnerable residents are protected from the cold.

Meanwhile in California, a winter heat wave has set records with highs topping 80 degrees Fahrenheit (27 Celsius). The National Weather Service said the heat will continue through Wednesday but cooler conditions should begin Friday.