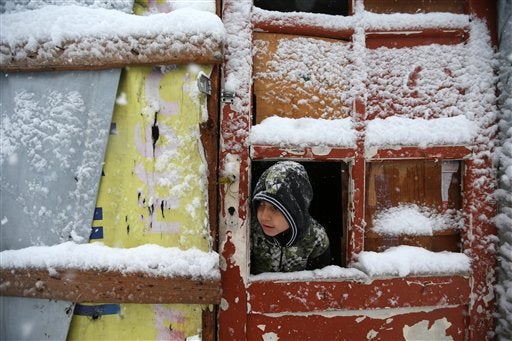 A Syrian boy looks out through his tent door covered in snow at a refugee camp in Deir Zannoun village, in the Bekaa valley, east Lebanon, Wednesday, Jan. 7, 2015.  AP

ANJAR, Lebanon — Snow fell in the Middle East on Wednesday as a powerful winter storm swept through the region, killing two Syrian refugees in Lebanon and forcing thousands of others who have fled their country civil war to huddle for warmth in refugee camps.

In Syria, the guns fell silent as snow fell in the cities of Damascus and Aleppo and government warplanes remained on the ground because of bad visibility.

The storm dumped rain and hail on Lebanon’s coast and heavy snows in the mountains and central Bekaa Valley, where gas stations, banks, schools and most shops closed.

While the storm disrupted life for everyone, it proved particularly trying for the hundreds of thousands of Syrian refugees who live in tents and makeshift shelters in the Bekaa.

In eastern Lebanon, security officials said a Syrian shepherd, Ammar Kamel, 30, and a 7-year-old boy, Majed Badawi, died in the storm Wednesday as they made the dangerous trek in rugged mountains covered with snow from Syria to the Lebanese border town of Chebaa. The officials spoke on condition of anonymity because they were not authorized to speak to the media.

Near the town of Anjar, men used brooms and sticks to try to clear the heavy snow from the tops of refugee tents, fearing the weight might cause the shelters to collapse. Inside the tents, adults could be seen huddling around wood-burning stoves to try to keep warm.

Elsewhere, Palestinian authorities in the West Bank and Gaza Strip declared a state of emergency over the storm. An eight-month-old Palestinian infant in the Tulkarem refugee camp died in a fire caused by a heating stove, said Palestinian civil defense ministry spokesman Loae Bani Odeh.

Snow also accumulated in the Golan Heights and northern Israel. Schools across Jerusalem closed ahead of a forecast warning of 10 inches (25 centimeters) of snowfall.

In Syria, snow blanketed Qassioun Mountain, which overlooks the capital, Damascus. The snowfall also brought traffic to a near standstill in the city and prompted the Education Ministry to shutter schools and universities for two days. 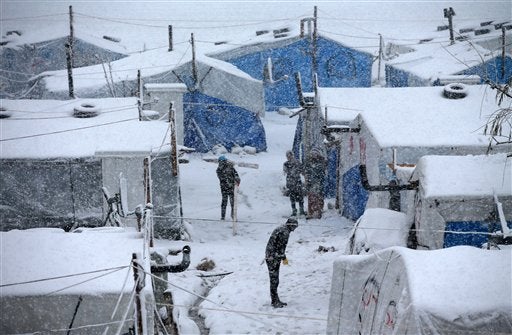 Syrians stand between their tents as they prepare to remove the snow from the top of their tents at a refugee camp in Deir Zannoun village, in the Bekaa valley, east Lebanon, Wednesday, Jan. 7, 2015.  AP 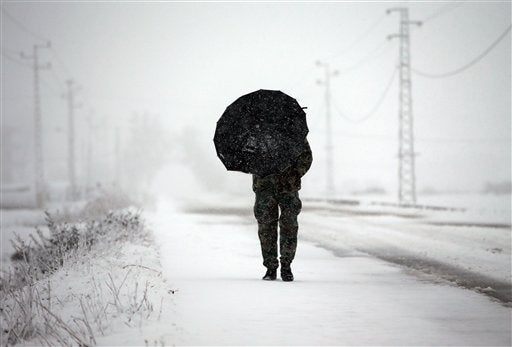 A Lebanese army soldier holds an umbrella as he walks at a main road covered by the snow, in Al-Marj village, in the Bekaa valley, east Lebanon, Wednesday, Jan. 7, 2015. AP 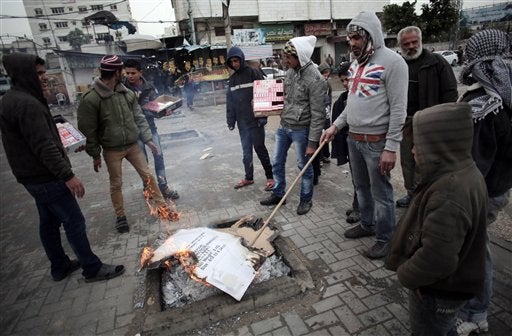 Palestinian street vendors gather around fire to worm during a cold storm in the main market of Gaza City, Wednesday, Jan. 7, 2015. Palestinian authorities in the West Bank and Gaza Strip declared a state of emergency over a powerful winter storm that swept through the region. AP