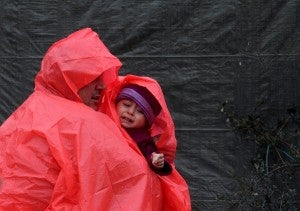 A Syrian refugee man holds his son near his tent as a heavy snowstorm batters the region, in a camp for Syrians who fled their country’s civil war, in the Chouf mountain town of Ketermaya, Lebanon, Wednesday, Dec. 11, 2013. The United Nations refugee agency says it is “extremely concerned” for hundreds of thousands of Syrian refugees scattered across the region amid a snowstorm with high winds and torrential rains. AP PHOTO/MOHAMMED ZAATARI

The nearly three-year-old conflict in Syria has killed an estimated 126,000 people and displaced millions, including more than two million who have fled across the borders and thousands who are living in makeshift camps.

Footage posted online by activists showed war-battered areas of Syria shrouded in snow, and at least two children have died from the cold, according to a spokesman for the opposition National Coalition.

“When it will start is difficult to say—I think the authorities in Qamishli are going to check conditions at the airfield on Friday,” UN refugee agency (UNHCR) regional spokesman Peter Kessler told AFP.

Heavy snow in Turkey forced the cancellation of scores of flights and caused major disruption to road and sea traffic.

In tent camps across Lebanon, thousands of Syrian refugees huddled on muddy floors under plastic sheeting that provided little relief from the icy winds.

“I hate the cold,” said 13-year-old Sakr in a camp in Saadnayel, in the mountains outside Beirut, where children, many without hats or gloves, sneezed and rubbed their hands together.

“When it snows, the meltwater becomes mud inside the tents, which collapse on our heads because of the weight of snow.”

More than 800,000 Syrians have fled to Lebanon since the civil war erupted, with many sheltering in tents and unfinished buildings.

The UNHCR said it was working with the Lebanese army to distribute blankets and provide money for heating fuel.

In the Bekaa Valley of eastern Lebanon where most of the tent camps are concentrated, temperatures were expected to drop below freezing overnight.

The representative of the UN children’s fund (UNICEF) in Lebanon, Annamaria Laurini, warned the snowstorm was “the beginning of a challenging winter ahead, especially for those living in inadequate shelters and exposed to cold and wet conditions”.

Residents of the sprawling Zaatari camp in northern Jordan, home to 120,000 Syrian refugees, fared slightly better as the storm brought heavy rains but no snow.

Authorities said they have set up 20,000 caravans, but thousands of people are still in tents.

Elsewhere in the eastern Mediterranean, temperatures plunged and heavy snow fell at higher elevations, including in Jerusalem where schools were closed.

In the Gaza Strip, sanitation services and sewerage, torrential rains filled the streets with floodwater and overflowing sewage, and forced the closure of schools and banks.

Hamas-run authorities said about 40 homes were flooded in Rafah and Khan Yunis, and residents were sheltering in police stations.

Most residents had to rely on generators for heat as the fuel crisis has led to regular power outages.

Storms have brought down four electricity lines from Israel and one from Egypt, energy authority spokesman Ahmad Abu al-Amrin said on Facebook, cutting power supplies to homes to four hours a day from the previous six.

Hamas cancelled marches to mark Friday’s anniversary of the founding of the movement.

The two men discussed in a telephone call “the humanitarian situation the Gaza Strip is suffering” and “ending division” between the bitter rivals, Hamas’s Al-Rai news agency said.

In the occupied West Bank, snow fell on Bethlehem’s Manger Square, the traditional site of the birth of Jesus Christ. Most West Bank schools were closed but roads were generally passable and no serious accidents were reported.

The government in Jordan closed ministries and other offices because of heavy snow and rain and urged residents to stay indoors. Banks and schools were also shut.

In Egypt’s Sinai, heavy rain caused power cuts and two policemen were injured when their car overturned on a muddy road.

The arid coastal Levant enjoys mild weather for much of the year, but winter often brings heavy rains that snarl traffic in cities ill-adapted to it.—Rana Moussaoui