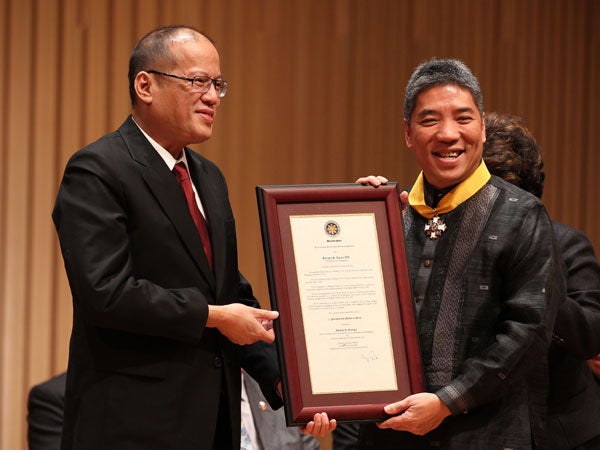 President Aquino presents the Presidential Medal of Merit to former National Historical Commission of the Philippines chairman Ambeth Ocampo during the Meeting with the Filipino Community at the National Olympics Memorial Youth Center in Tokyo, Japan, on Thursday, Dec. 12, 2013, at the sidelines of the Asean-Japan Commemorative Summit. RYAN LIM/MALACAÑANG PHOTO BUREAU

President Aquino on Thursday conferred on Ambeth Ocampo, a historian, academician, author, journalist and columnist for the Inquirer, the Presidential Medal of Merit for his contributions to the preservation of the Philippines’ rich history.

He was also chair of the National Historical Institute from 2002 to 2005.

As head of the NCCA, Ocampo oversaw the funding for the arts and provided support for cultural agencies, such as the National Library, National Museum and National Archives.

The President conferred the honor on Ocampo during his meeting with the Filipino community at the National Olympics Memorial Youth Center in Tokyo.

Aquino is in Tokyo for the 40th Asean-Japan Commemorative Summit, a regional gathering that will allow the heads of state and governments in Southeast Asia to discuss with Japan common concerns, including territorial disputes with China in the West Philippine Sea (South China Sea), East Sea and East China Sea.