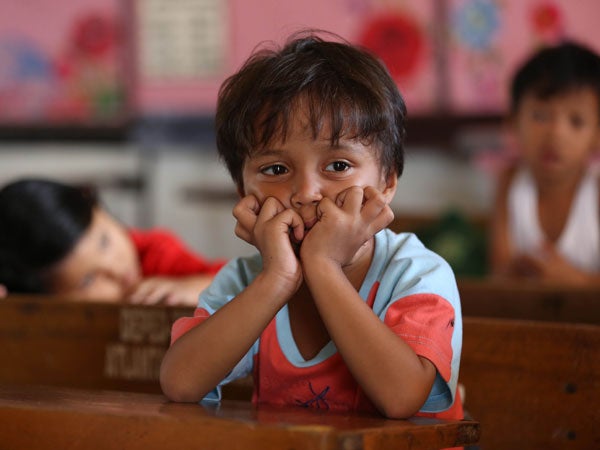 Young typhoon survivors wait for their teacher as they attend school at typhoon-ravaged Tolosa town, Leyte province, on Monday, Dec. 9, 2013. Though many of the school buildings are gone, classes in most public schools in the Eastern Visayas have resumed, three weeks after Supertyphoon “Yolanda” devastated the region on Nov. 8. AP PHOTO/AARON FAVILA

PALO, Leyte—Though many of the school buildings are gone, classes in most public schools in the Eastern Visayas have resumed, three weeks after Supertyphoon “Yolanda” devastated the region on Nov. 8.

The 40 to 60-percent turnout of students in the first week of the resumption of classes on Dec. 2 was enough to elate the Department of Education (DepEd) Region VIII office based in this town.

“We didn’t expect the turnout. We thought we would see only one percent,” said Luisa Bautista-Yu, DepEd Eastern Visayas regional director.

Among the teachers, around 80 to 90 percent reported back to their schools, Bautista-Yu said.

While many government offices were still closed, the DepEd schools and offices fared relatively better since they were able to reopen despite the “challenging” conditions.

Some private schools informed the DepEd they could not reopen until January.

The latest report said at least 759 schools in the region suffered significant damage, while 3,146 classrooms were completely destroyed.

San Roque Elementary School in Tanauan town was one of the many schools “washed out” by Yolanda, like all the structures in the second-class coastal municipality in Leyte.

In a small clearing, beside jagged concrete walls that were all that were left of the school, two white Unicef tents served as replacement classrooms.

Before Yolanda struck, the school had 750 students in kindergarten and the elementary grades, 17 teachers and a principal.

Only 254 children have shown up since the school reopened on Dec. 2.

Fifth-grader Marialee Gadwena said she came back to school because she wanted to study even if what they had been doing was play.

She is staying with an uncle in Barangay (village) Sta. Cruz. Her parents and an older brother died when their house was engulfed by a storm surge at the height of Yolanda’s onslaught.

She had been brought to her uncle’s house before the typhoon hit.

“They said I should not think about it anymore,” Marialee quoted her two surviving older brothers telling her, keeping her tears in check.

When told that she could share her thoughts with her favorite teacher, she said the teacher, Lorna Alamo, had also died, trapped in her house.

Marialee said she had 45 classmates but she had seen less than 10 of them so far.

Grade 6 pupil Nico Melo lost his entire family—his parents and two siblings. He has a long scar across his right cheek where a galvanized iron sheet hit him as he held on to a boat amid the rampaging floodwaters.

A teacher pointed out a boy who had lost his mother to the flood. When the teacher called out to him, the boy would not stop running, pretending not to hear the teacher.

“How do you talk to him? He’s evasive. Maybe next time, next time,” the teacher Alex Songalia said.

Songalia said many people died in their school after they chose to stay there close to their homes while they sent their children to another evacuation center farther inland.

She said the students now run away from the school whenever it starts to rain because of their memory of the disaster.

“They can see the sea from here so they don’t want to be here when it rains,” Mirasol said.

Sometimes the children leave earlier because they have to line up for relief, she added.

Getting the children back to their school routine not only helps the pupils but the teachers as well.

Having nearly died inside their home, Mirasol said she and her husband cannot afford to repair their house since whatever money they can get will have to go to their youngest child’s college education.

She said she saw the good in the DepEd’s order to resume classes as soon as possible.

“If I don’t go to school every day, I would have gone crazy by now,” she said.