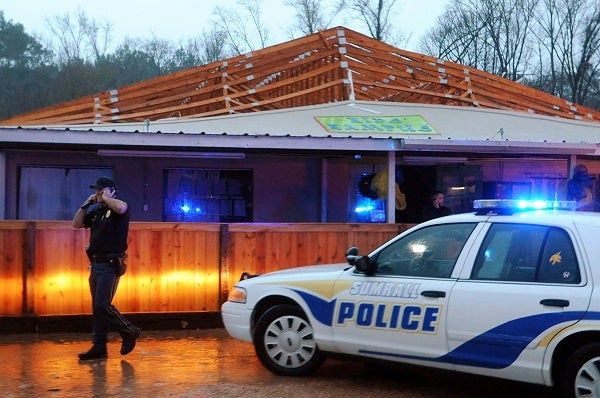 Police inspect Kid’s Kampus, a daycare facility after a tornado ripped the roof off of the building in Sumrall, Miss., Tuesday, Dec. 23, 2014. According to the Sumrall Police Department, all 30 children and employees were unharmed and moved to the neighboring Citizens Bank. AP

JACKSON, Mississippi – Severe storms have killed at least four people in Mississippi and damaged homes and businesses throughout the state, leading to the governor declaring a state of emergency for two counties.

Governor Phil Bryant’s office said thousands were without power Tuesday night around Columbia, which is about 80 miles (130 kilometers) southeast of Jackson.

Jones County Emergency Management director Marda Tullos said a man and woman were killed Tuesday inside a mobile home in the storm’s path.

Watches and warnings were out for a swath of Mississippi, Louisiana and Alabama with the storms moving toward Georgia, including Atlanta, and Florida late Tuesday into Christmas Eve.