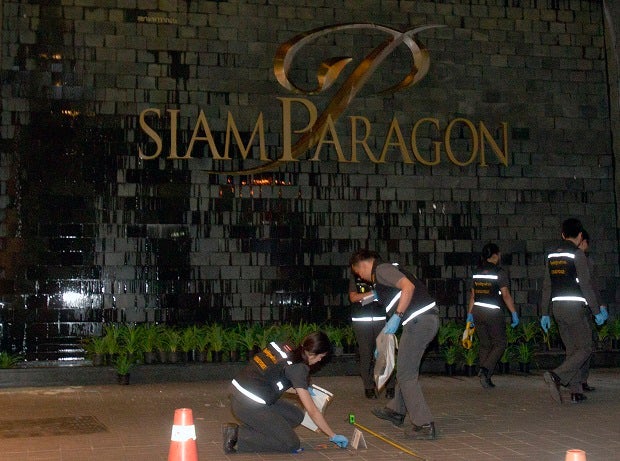 Thai police forensic officers investigate near the front of the Siam Paragon shopping mall, the site of a blast in Bangkok, Thailand, Sunday, February 1, 2015. Thai police say that two explosions at a transit hub near major downtown shopping mall were caused by small improvised explosive devices, but no one was hurt and damage was minor. AP

BANGKOK, Thailand — Two explosions at a transit hub near major downtown shopping malls in the Thai capital on Sunday night were caused by small improvised explosive devices, but no one was hurt and damage was minor, police said.

The explosions occurred around 8 p.m. at the Siam Square station of Bangkok’s Skytrain system, which serves several shopping centers including the upmarket Paragon mall.

The incident came at a time of slightly raised political temperatures in Thailand, as the country’s ruling junta has tightened its clampdown on critics of its rule.

Police initially said the explosions were caused by a malfunctioning transformer, but National Police spokesman Lt. Gen. Prawut Thawornsiri later said they were caused by devices that were probably not meant to hurt anyone. Service at the station was temporarily suspended, but resumed after about an hour.

“We think the intent of the bombers was not to harm anyone but was rather to cause trouble and to damage the overall mood,” Prawut told The Associated Press. “We have not assumed that it was politically motivated but we are pursuing a few motives in our investigation.”

There has been little open opposition, and virtually no violent opposition, to the military regime that took over from an elected civilian government after a coup d’etat last May. Martial law, imposed days before the coup, remains in effect under the dual administration of the junta and a military-appointed interim Cabinet, and any dissent is strongly discouraged.

When members of the ousted government last week mildly protested sanctions imposed against their leader, former Prime Minister Yingluck Shinawatra, they were chastised by the military authorities and called in for meetings known as “attitude adjustment.”

Thailand has a history of conspiratorial politics, and the government is just as likely as its opponents to be considered the perpetrator of the bombings, since they could be seen to justify its repression.

There is also a tradition of so-called “third hands” taking unsavory actions to advice their own agendas. A list of suspects would have to include as well students of vocational schools, notorious for gang violence and the use of small home-made explosive devices. One such school is not far from where Sunday’s small blasts took place.

Many, if not most bombings in Bangkok go unsolved, including a series of blasts that killed three people and wounded about two dozen as Thais were celebrating the New Year in 2007.