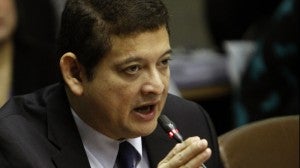 MANILA, Philippines–Senator Teofisto Guingona III on Friday called for the creation of an independent truth commission that will conduct a “thorough” and “impartial” probe on what he described as massacre of 44 policemen in Maguindanao.

“As chair of the Senate peace, reconciliation and unification committee, and as a senator from Mindanao, I am calling today for the creation of truth commission which will conduct a thorough and impartial probe on the massacre of more than 40 members of our elite Special Action Force Unit of the Philippine National Police in Mamasapano, Maguindanao,” Guingona said in a statement.

“While I respect the planned creation of a PNP Board of Inquiry to conduct a probe, I believe that the Maguindanao massacre has far-reaching consequences and implications which make it necessary for an independent commission to do the work. The massacre struck at the very heart of the Nation and of the Peace Process,” he said.

“I shall ask them to lend their wisdom and sobriety to the search for truth,” said the senator.

“I believe that an independent commission alone can help us get to the bottom of this unfortunate incident and to find the answers to the questions the Nation is asking,” he said.

He said among the questions that need answers are the following: “Why did the massacre happen? Did this have to happen? Could this have been averted? Who are responsible and accountable for what happened? Was the Chain of Command disregarded here?”

The “wise and sober probe” to be conducted by a truth commission, he said, was vital to the restoration of an atmosphere of calm in Mindanao and would help the government understand what steps to take next to save and advance the peace process.

“More than 40 of our best-trained policemen perished in this massacre. It will be a cruel injustice if the truth behind the incidents that led to their death is not uncovered,” Guingona said.

The senator said the creation of the commission would be “our humble way of repaying their gallant service to our country.”

“As the Nation marks a National Day of Mourning for our fallen police heroes, we stand beside their loved ones as we share with them the grief and sorrow of their loss,”he said.

“That loss is irreplaceable. There is nothing we can say that can assuage their pain. At this point, we can only assure them that we will not stop until the Truth shall have been known,” the senator added.