Aquino meets with kin of slain SAF men; not everyone welcoming 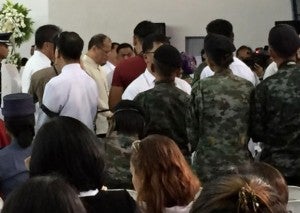 President Benigno Aquino III prays for the SAF 44 as he approaches each coffin. PHOTO by KRISTINE SABILLO/INQUIRER.net

MANILA, Philippines–President Benigno Aquino III on Friday personally commiserated with the relatives of the elite cops killed in Mamasapano.

Attending the necrological services for 42 of the 44 slain Special Action Force (SAF) members, Aquino approached each coffin and gave medals of valor (“Medalya ng Katapangan”) to the family members.

He also paused to pray for the cops.

As he was giving out the medals, one woman seemed to snub the President who then gave the medal to another relative.

Afterwards, Aquino met with the families in private inside a holding room. Five minutes was allotted for each family.

Aquino attended the memorial services a day after he received flak for being absent at the arrival honors held in Villamor Airbase.

Aquino on Wednesday night gave a public address, tackling the controversial issue. He blamed the SAF head for not coordinating with the military. He also declared Friday as the National Day of Mourning.

Kris Aquino condoles with kin of slain SAF men: ‘I know what they’re going through’