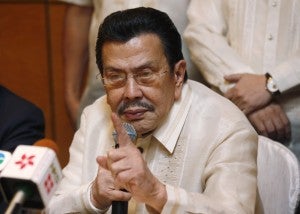 “Be a hermano mayor first. Let him try,” Estrada said during an interview with Julius Babao over dzMM Teleradyo on Friday.

The comment came a couple of days after De Castro received flak for allegedly cutting off Winnie Cordero as she reported on the city’s preparations for the feast of the Black Nazarene.

During a live segment of TV Patrol, De Castro, a Nazarene devotee, said Estrada failed to deliver on his promise to act on ambulant vendors before. Cordero was about to add to her report but the anchorman cut her off to lead to the segment’s extro.

(The complaints of Vice President Noli de Castro, about the vendors…you know, during ordinary days we are able to monitor them.)

But when the crowd reaches hundreds of thousands or even millions, the situation becomes extremely difficult to control, Estrada said.

Estrada said deploying 50 or even 50,000 policemen was not enough to contain the millions of people participating in the yearly procession.

Nevertheless, he said the city government has done everything to manage the vendors.

At one point, Estrada said De Castro should understand the situation of the informal sector.

(He’s looking for flaws. He should just let the poor people earn a living. As I always say, a hungry stomach knows no law. He should know that.)

No selfie, no booze for Nazarene feast