No selfie, no booze for Nazarene feast 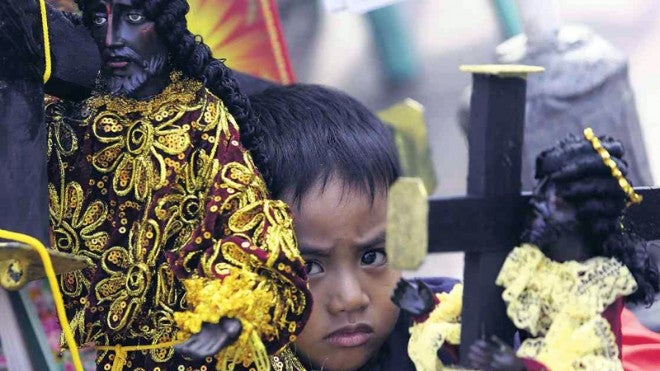 YOUNG DEVOTEE A boy sits beside the images of the Black Nazarene in Quiapo, Manila, in preparation for Friday’s annual procession. JOAN BONDOC

MANILA, Philippines–Two shots are “prohibited” on the Feast of the Black Nazarene—taking selfies at Manila’s Quirino Grandstand and imbibing alcohol in certain parts of the city.

Priests from Quiapo Church urged people, wishing to kiss the image of the Black Nazarene when it is taken to Quirino Grandstand in Manila on Friday, its feast day, not to take selfies.

“We appeal to devotees, please, don’t take selfies immediately before, during, or after you get your turn at the pahalik,” said Fr. Ric Valencia, parochial vicar of Quiapo Church, or the Minor Basilica of the Black Nazarene.

He was referring to the Filipino word for the custom of venerating the image of the Black Nazarene by stroking or kissing the cross or feet while saying a prayer.

Valencia noted that the queue to the image slowed down in the past few years as people waited for their companions before taking selfies, blocking the path of other devotees.

“It would really speed up the line if people do not take selfies while they are near the Nazarene. This, aside from obviously affecting the holiness or the sacred presence around the image of the Black Nazarene,” he said.

For his part, Manila Mayor Joseph Estrada on Tuesday signed Executive Order No. 2, which imposed a liquor ban during the feast and during Pope Francis’ visit to Manila next week.

“These are consecutive events in Manila, and we need to ensure that we can maintain peace and order in the city by whatever means we can,” Estrada said in Monday’s press conference detailing preparations for the annual grand procession of the Black Nazarene.

Under Estrada’s order, “no person shall sell, offer, serve, buy or take beer, wine or intoxicating liquors on any street, sidewalk, plaza or any other place within 200 meters” of certain places.

These places are the Minor Basilica of the Black Nazarene (commonly known as Quiapo Church), the route of the procession, and the vigil area around Quirino Grandstand, and other activity areas of the procession.

The liquor ban is also in effect within 200 meters from wherever the image of the Black Nazarene, is located while in transit.

Estrada also suspended classes on Friday in the city in all levels in public and private schools in view of the road closures and disruptions in traffic the annual procession was expected to bring.

Work at City Hall has also been called off on Friday, except for offices with vital functions during the procession.

Father Valencia said selfie-takers would not be arrested.

“We don’t want to ban them, or even arrest them for doing that; there are no hard and fast rules for taking selfies. We discourage it, especially if they block the way or slow down the line. Let’s be considerate to others,” Valencia said.

This year, a separate replica of the statue of the Black Nazarene will remain at Quirino Grandstand after the procession so more people can venerate the image.

Aside from discouraging selfies, devotees are also urged to strictly follow the queue for venerating the image.

“The Department of Public Works and Highways (DPWH) is still renovating the stage at Quirino Grandstand in time for the papal visit. So we will have a separate stage built in front of the grandstand for the Black Nazarene. There will be only one line to the back of the image on the right side of the stage,” he said.

“This year, we will be using Jones Bridge and Escolta to get to the Quiapo area, because MacArthur Bridge, which is the traditional bridge included in the route, is being renovated,” Ignacio said in a press conference detailing preparations for the procession this year.

The bridge was used last year in the procession, after the DPWH said it found cracks on MacArthur Bridge which could endanger those joining the procession. However, hundreds of thousands of devotees used brute force to push away the freight containers blocking the bridge to cross it.

Ignacio said there were a few tweaks to the ceremonies leading up to the procession. It will still start at Quirino Grandstand, but instead of celebrating Masses every hour from 3 a.m., a nightlong vigil from sundown to sunrise will be conducted.

Only one Holy Mass will be held at the grandstand at midnight on Friday, Ignacio said. “And then, around 5:30 a.m., before the procession leads, there will be a liturgy to start it off, led by Manila Archbishop Luis Antonio Cardinal Tagle. The procession will then get underway at 6 a.m.”

The traslacion will pass through Katigbak Drive, P. Burgos Street, Taft Avenue, Jones Bridge, Escolta, Plaza Sta. Cruz and C. Palanca Street all the way to Arlegui Street on the other side of Quezon Bridge.

From there, it will pass through Fraternal, Vergara, Duque de Alba, Castillejos and Farencio Streets before returning to Arlegui and proceeding to Nepomuceno, Aguila and Carcer Streets.

The procession will then head to Hidalgo Street and pass Plaza del Carmen beside San Sebastian Church, before going to Bilibid Viejo, G. Puyat and Guzman Streets and back to Hidalgo, where it will eventually go under Quezon Bridge again before heading to Plaza Miranda and Quiapo Church.