In his letter addressed to Commission on Human Rights chair Loretta Rosales, lawyer Ferdinand Topacio said De Lima and other officials from the National Bureau of Investigation (NBI) played favoritism when they selected inmates Noel Martinez, Willy Sy, German Agojo and Michael Ong Chan to be transferred to the NBI. 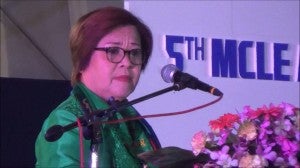 “We urge your vigilance on these cases especially in the persistence of reports that Secretary De Lima had been unduly selective and have exercised favoritism in identifying the inmates to be transferred to the NBI, exempting therefrom some personalities close to her,” according to the letter of complaint against De Lima, who used to be a human rights chief under the Arroyo administration.

The convicts were among the 19 prisoners transferred to the NBI detention center in Manila after a surprise inspection of their quarters in NBP yielded contraband and luxurious items.

Topacio said the NBI and DOJ denied the families and counsels of inmates’ visitation rights.

“In effect, Martinez, Sy, Ong, Agojo and the rest of the transferred inmates have been detained incommunicado, completely unreachable by their relatives and counsels, and worse, for reasons… that are not made known to them, much less to the public. This is in itself is a violation of their Constitutional… Bill of Rights,” Topacio said.
After filing the complaint, Topacio sat down in a meeting with Rosales, who denied that the convicts were rendered incommunicado by De Lima.

Rosales said the government was only doing its mandate to curb criminality when it cut off the convicts’ constitutional rights.

“You have to balance the right of the public to security against heinous crime with the right of the inmates and family visits… It is incumbent upon government to cut off their rights for the immediate problem of contraband,” Rosales said.

Rosales said the convicts used to enjoy their rights until they violated them by continuing their illegal trade behind bars.

“They were enjoying their rights but they abused these rights,” she added.
In an interview after the filing, Topacio said even rich inmates are entitled to their constitutional rights to counsel and family visits.

“That is immaterial, rich or poor. The measure of a society is how it treats its helpless prisoners. Kung ang rich na-de-deprive ng rights, paano pa kaya ang mga poor?” Topacio said.

Topacio said there is no basis for the government to cut off the inmates’ constitutional rights.

“These are safeguards to abuses from government. Hindi pwedeng isuspinde ang right to counsel and presumption of innocence,” Topacio said.

Topacio earlier said in a statement that the inmates’ relatives and friends had been trying to visit them since last week “but were turned away by armed elements of the NBI, who simply said that no visitors were allowed.”

On December 15, De Lima led a crackdown on NBP following reports that convicted drug lords were still able to operate their illegal trade behind bars. The operation of NBI agents netted pieces of jewelry, cash, sex toys, firearms, illegal drugs, and hand grenade, among other items.

The raid also resulted in the discovery of 19 high-profile inmates’ luxurious quarters which house a sauna, jacuzzi, and a music studio.

Read Next
38 Metro Manila police stations, 100 crime-prone areas to get CCTV cameras
EDITORS' PICK
Metro Manila now at moderate risk for COVID-19 — DOH
Look Through: Super Typhoon Karding barrels through parts of Philippines
House energy committee chair Arroyo bats for cheap electricity
Motorcycles, smartphones, and cash prizes up for grabs in TNT’s ‘Tuloy Ang Saya’ Raffle in Mindanao
Do all the things you do, faster
POGOs not linked to Illegal online gaming, says Pagcor
MOST READ
Robredo supporter tackles elephant in room: No massive fraud in 2022 polls, surveys were just right
Shopee PH gets flak for getting Toni Gonzaga
DepEd: We are in a crisis situation in education sector
Lives destroyed as armyworms invade Philippine ‘onion capital’
Don't miss out on the latest news and information.