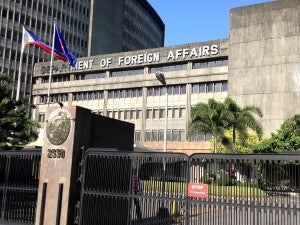 MANILA, Philippines–The Department of Foreign Affairs (DFA) on Tuesday said consular services at the National Capital Region (NCR) would be closed on January 15 to 19 during the visit of Pope Francis to the Philippines.

“There shall be no passport processing, releasing and other related consular services during those dates,” the DFA said in a statement.

The DFA Aseana Office at Macapagal Boulevard in Pasay City and all mall-based DFA Satellite Offices in Metro Manila will also be closed.

The DFA, however, said those with passport-related queries could send e-mails to [email protected].

The DFA’s move is in accordance with Proclamation No. 936 of President Benigno Aquino III declaring January 15, 16, and 19 as special non-working holidays in the metro in view of the papal visit.