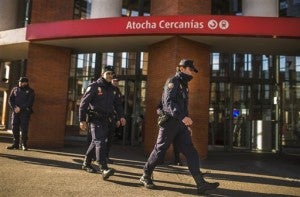 Madrid’s Atocha station, the scene of the worst terror attack in Spanish history, was evacuated Friday after a false alert when a man threatened to blow himself up.
Police said a man claiming to be carrying a bomb in his backpack was arrested, but nothing was found.
Islamist militants killed 191 people and injured nearly 2,000 in a series of coordinated backpack bomb attacks on trains travelling to the station on March 11, 2004, that became known as the 11-M attacks.
“We searched a train and the rails but we found nothing,” police told Agence France-Presse.