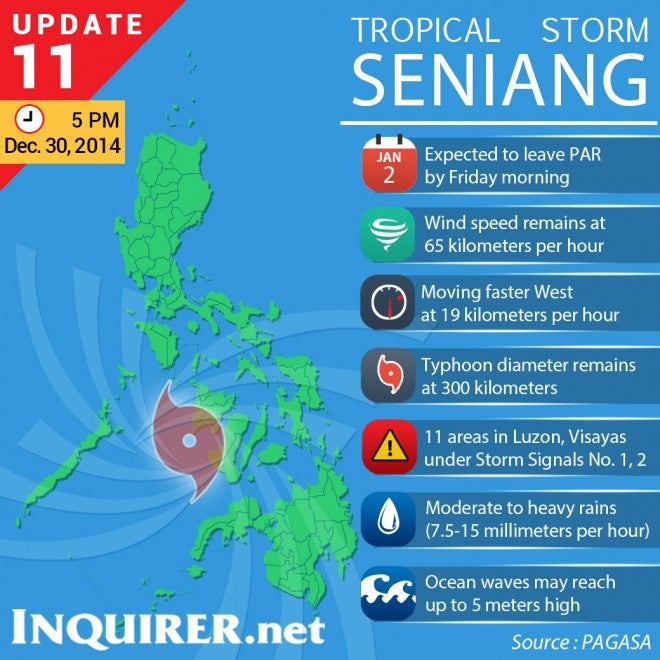 In a radio interview, the National Disaster Risk Reduction and Management Council said that Seniang has killed 21 people. Figures provided by local officials, however, estimated more people could have died because of the storm.

Mayor Stephanie Uy-Tan said 12 people died when a landslide buried two vans and six houses near a mountainside highway in eastern Catbalogan City. She said voices could still be heard from one of the vans and that rescue efforts were ongoing.

Olive Luces, a regional civil defense official, said 10 members of a family died after a creek-side house where they had gathered was washed away by flash floods in central Cebu province. Three other people were missing in the same town. 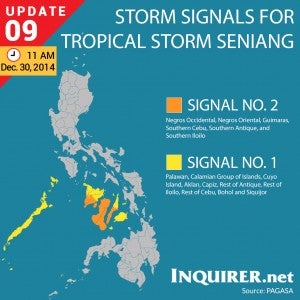 Pagasa said in its 5 p.m. weather bulletin that Seniang, which packs maximum sustained winds of 65 kilometeres per hour (kph) near the center and gustiness of up to 80 kph, is now moving westward at 19 kph.

The storm was spotted 108 kilometers southwest of Iloilo City on Tuesday 4 p.m.

Meanwhile, Signal no. 1 was hoisted over Calamian Group of Islands, Negros Occidental, Aklan, Capiz, the rest of Iloilo, and the rest of Antique.

Estimated rainfall remains moderate to heavy or at 7.5 to 15 millimeters per hour within the 300-kilometer diameter of the tropical storm.

Those living in provinces where a storm signal was hoisted are warned against possible flashfloods and landslides.