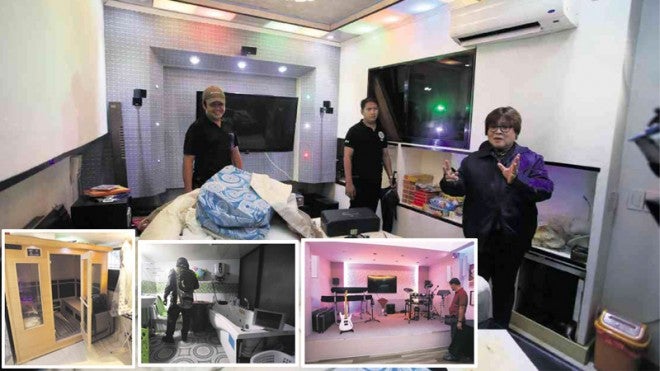 BILIBID OR NOT? LUXURIOUS QUARTERS IN MAXIMUM SECURITY COMPOUND Justice Secretary Leila de Lima leads a dawn raid on the air-conditioned rooms of powerful convicts at the New Bilibid Prison in Muntinlupa City. Peter Co’s room has a sauna while that of his assistant, Jojo Baligad, boasts of a jacuzzi. Convict Herbert Colangco’s room rocks with a music studio. EDWIN BACASMAS

MANILA, Philippines – A hand grenade, a .9 mm caliber Springfield armory, a handgun, and a weighing scale with shabu – these items greeted authorities led by Justice Secretary Leila De Lima on the third raid at the National Bilibid Prison last Monday.

De Lima told reporters Tuesday that authorities found the contraband in a hole under a cemented bench during the raid.

She said she has set the deadline for all inmates to surrender their contraband tomorrow, December 24, the Christmas Eve.

“We continue to look for all other hidden (contraband). Tomorrow is my deadline for them to produce all contraband that may have been requested of them to be concealed by these drug inmates…” De Lima said.

On December 15, the Justice Secretary led the National Bureau of Investigation authorities in cracking down on contraband owned by convicted drug lords. The operation netted pieces of jewelry, cash, sex toys, firearms and illegal drugs.

The raid also resulted in the discovery of 19 high-profile inmates’ luxurious quarters which house a sauna, jacuzzi, and even a music studio.

A second raid followed resulting in the discovery of more prohibited items such as a private gym, a refrigerator, and even some sex enhancement drugs.