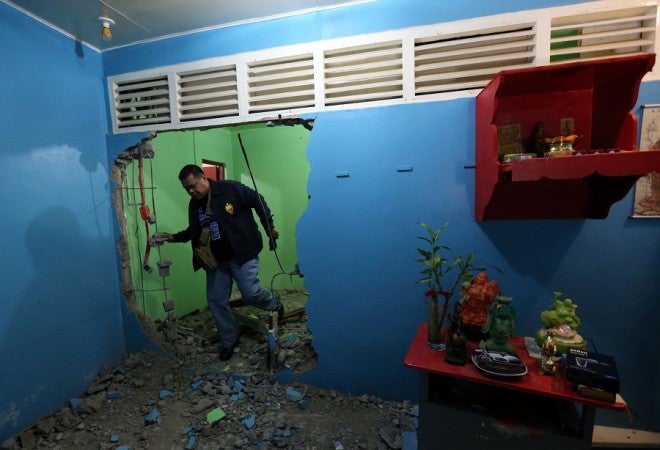 MANILA, Philippines–A private gym, refrigerators and sex enhancement drugs were among those seized by authorities in the second wave of raid in the New Bilibid Prison Friday.

Authorities conducted another search after receiving information that drug lords were tipped off by prison guards about Monday’s inspection.

Agents of the National Bureau of Investigation were led to a different kubol from their original target during Monday’s raid, NBI-Anti Illegal Drugs Chief Eric Isidoro said.

Isidoro said his team, intending to inspect the kubol of Hans Sy, a member of the Commando Gang, was led to a small kubol containing shoes and clothes that would not fit him.

On Friday, the team went back to Sy’s kubol as well as those of Arman Agojo, Vicente Sy, Eugene Chua, Jacky King, Herbert Colangco, and Benjamin Marcelo.

Isidoro said the real kubol of Sy was bigger.

The NBI discovered a hidden door that led to a personal gym, with two small refrigerators, and equipped with gym equipment, such as punching bag, gloves, and punch pads among others.

On his other rooms, the authorities recovered sex enhancement drugs as well as bottles of ketamine, which was supposed to be for horses and illegal for human consumption.

Also seized were a television set and an air-conditioning unit, as well as a permit to carry gun license for Sy but no firearm was recovered.

On the other hand, the NBI discovered that King asked a fellow inmate to keep his valuables. The NBI seized a TV set, amplifier, electric fan, aircon and aquariums kept under the bed of King’s neighbor.