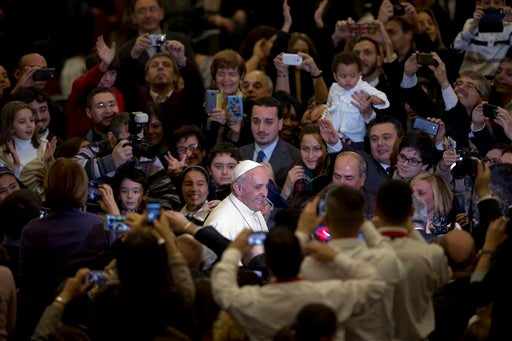 Pope Francis is cheered by faithful during an audience with the Holy See’s employees in the Paul VI hall at the Vatican, Monday, Dec. 22, 2014. AP

Francis issued a blistering indictment of the Vatican bureaucracy on Monday, accusing the cardinals, bishops and priests who serve him of using their Vatican careers to grab power and wealth, of living “hypocritical” double lives and forgetting that they’re supposed to be joyful men of God.

Francis turned the traditional, genteel exchange of Christmas greetings into a public dressing down of the Curia, the central administration of the Holy See which governs the 1.2-billion-strong Catholic Church.

Ticking off 15 “ailments of the Curia” one by one, Francis urged the prelates sitting stone-faced before him in the marbled Sala Clementina to use the Christmas season to repent and atone and make the Church a healthier, holier place in 2015.

Vatican watchers said they had never heard such a powerful, violent speech from a Pope and suggested that it was informed by the results of a secret investigation ordered up by Pope Emeritus Benedict XVI in the aftermath of the 2012 leaks of his papers.

Benedict tasked three trusted cardinals to probe deep into the Vatican’s back-stabbing culture to root out what would have prompted a papal butler to steal incriminating documents and leak them to a journalist. Their report is known only to the two Popes.

Francis had some zingers:

How the “terrorism of gossip” can “kill the reputation of our colleagues and brothers in cold blood.”

How cliques can “enslave their members and become a cancer that threatens the harmony of the body” and eventually kill it off by “friendly fire.”

How some suffer from “spiritual Alzheimer’s,” forgetting what drew them to the priesthood in the first place.

“The Curia is called on to always improve itself and grow in communion, holiness and knowledge to fulfill its mission,” Francis said. “But even it, as any human body, can suffer from ailments, dysfunctions, illnesses.”

Francis, who is the first Latin American Pope and has never worked in the Italian-dominated Curia before he was elected, has not shied from complaining about the gossiping, careerism and bureaucratic power intrigues that afflict the Holy See.

His 2013 Christmas address cast a spotlight on such sins.

But a year into his reform agenda, Francis seemed even more emboldened to make clear to the prelates themselves that superficial displays of change aren’t what he is looking for.

“This is a speech without historic precedent,” Church historian Alberto Melloni, a contributor to Italian daily Corriere della Sera, said in a telephone interview. “If the Pope uses this tone, it’s because he knows it’s necessary.”

Melloni noted that until Francis was elected, the Vatican bureaucracy largely answered to no one, saying “an entire generation of the Curia ran it as if they were the Pope.”

St. John Paul II was too busy traveling the world, and later too sick to pay attention to administrative details. For his part, Benedict left the minutiae of running a government to his deputy, later determined to have been part of the problem.

The Rev. Robert Wister, a Church historian at Seton Hall University, said Francis was essentially asking the Curia to undergo an examination of conscience, asking them to reflect on how they had sinned before God before going to confession.

“Perhaps he believes that only a severe rebuke can help turn things around,” he said.

The cardinals were not amused. Few smiled as Francis spoke, and at the end they offered only tepid applause to a speech that was so carefully prepared it had footnotes and Biblical references.

Francis greeted each cardinal, but there was little Christmas cheer in the room.

It is, to be fair, a difficult time for the Curia. Francis and his nine key cardinal advisers are drawing up plans to revamp the whole bureaucratic structure, merging offices to make them more efficient and responsive.

Francis has said though that while this structural reform is moving ahead, what is taking much longer is the “spiritual reform” of the people involved.

The Vatican’s finances are also in the midst of an overhaul, with Francis’ finance czar, Cardinal George Pell, imposing new accounting and budget measures on traditionally independent congregations not used to having their books inspected.

Francis started off his list with the “ailment of feeling immortal, immune or even indispensable.”

Then one by one he went on: Being rivals and boasting. Wanting to accumulate things. Having a “hardened heart.” Wooing superiors for personal gain. Having a “funereal face” and being too “rigid, tough and arrogant,” especially toward underlings—a possible reference to the recently relieved Swiss Guard commander said to have been too tough on his recruits for Francis’ tastes.

Some critiques could have been seen as worthy of praise: Working too hard and planning too much ahead. But even those traits came in for criticism as Francis noted that people who don’t take time off to be with family are overly stressed, and those who plan everything to a “T” don’t allow themselves to be surprised by the “freshness, fantasy and novelty” of the Holy Spirit.

At the end of the speech, Francis asked the prelates to pray that the “wounds of the sins that each one of us carries are healed” and that the Church and Curia itself are made healthy.