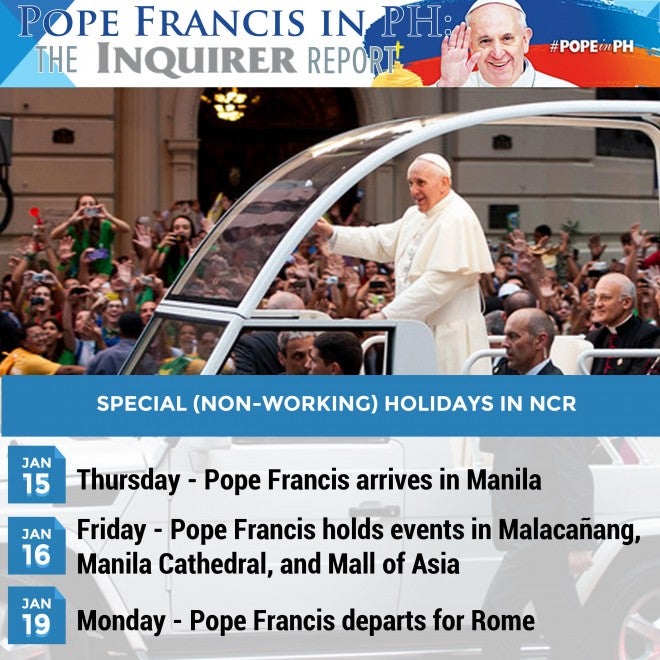 MANILA, Philippines—President Benigno Aquino III has declared special non-working days next month to allow more Filipinos to witness the visit of Pope Francis to the Philippines.

Under Proclamation No. 936, three of the five days the Supreme Pontiff will spend in the country will be be non-working days in Metro Manila. They are January 15, 16, and 19. January 17 and 18 fall on weekends. 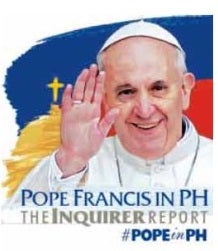 “In view of the visit of the Pope, the Head of State of the Vatican City, I Paquito Ochoa Jr., Executive Secretary, by authority of His Excellency, Benigno S. Aquino III, do hereby declare January 15, 16 and 19, 2015, as special (non-working) days in the National Capital Region,” according to the proclamation dated December 22.

Francis is set to arrive on January 15 in Manila where Aquino will welcome him at the Villamor Air Base. The formal welcome will take place the following day at the Kalayaan grounds of the Malacañang Palace to allow more people to see the Pope.

Francis will meet with Aquino and other top government officials, including members of the diplomatic corps, at the Rizal Centennial Hall of the Palace before proceeding to the Manila Cathedral for a Mass.

Later in the afternoon, the Pope will have a meeting with families at the Mall of Asia Arena in Pasay City.

Gloria Arroyo home for Christmas –thanks to Pope Francis