At least 60 journalists killed in 2014—report 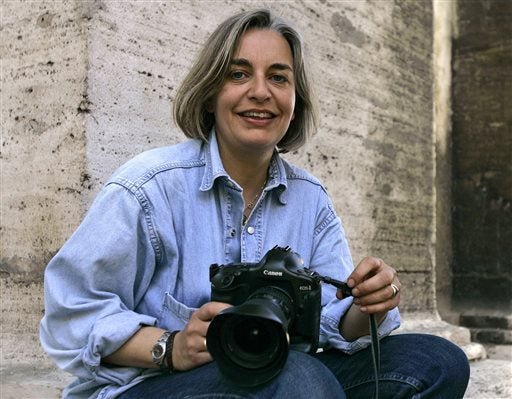 In this April 7, 2005 file photo, Associated Press photographer Anja Niedringhaus poses in Rome. Niedringhaus, 48, was killed and an AP reporter was wounded on April 4, 2014, when an Afghan policeman opened fire while they were sitting in their car in eastern Afghanistan. AP

NEW YORK — At least 60 journalists around the world were killed in 2014 while on the job or because of their work, the Committee to Protect Journalists said Tuesday, making the past three years the deadliest for journalists since the organization began keeping track more than two decades ago.

Syria was connected to two of the more horrifying killings of journalists this year, the beheadings by the Islamic State group of American freelancers James Foley and Steven Sotloff. Both had disappeared while reporting on the conflict.

The conflict in Ukraine between the new government and Russian-backed separatists saw five journalists and two media workers killed. They were the first that the CPJ had recorded in Ukraine since 2001.

An “unusually high proportion,” or about one-fourth, of journalists killed in 2014 were international ones, though the overwhelming number of journalists threatened continue to be local, the New York-based organization’s report said.

Two journalists for The Associated Press and a freelance translator for the AP were among the CPJ’s toll.

Those killed in 2014 include Anja Niedringhaus, an AP photographer who was shot to death while covering elections in Afghanistan. AP video journalist Simone Camilli and freelance translator Ali Shehda Abu Afash were killed in an explosion at an ordnance dump in the Gaza strip in August.

In addition, AP photographer Franklin Reyes Marrero died in a car accident while returning from an assignment in Cuba. The CPJ does not count deaths from illness or car or plane crashes unless they were the result of “hostile action.”

“2014 was a tragic year for journalists worldwide and for our organization in particular,” said John Daniszewski, vice president and senior managing editor for international news for the AP. While the casualties stemmed from war and conflict in different parts of the world, “they remind us of the daily courage and sacrifices made by professional journalists to bring back the news and information that so many rely on and take for granted.”

The report said the number of journalists killed in 2014 was down from 70 the year before, but the past three years have been the deadliest since the organization started compiling such records in 1992. Forty-four percent of the journalists killed were targeted for murder, the new report said.

The crushing conflict in Syria, now well into its fourth year, has been a major factor. The report said at least 17 journalists were killed there this year, with at least 79 killed since the fighting began in 2011.

“Syria has never been more dangerous for journalists,” a CPJ research associate, Jason Stern, said in a blog post. He pointed out that while the count of journalists killed in Syria this year is down from 29 last year, the country has become “an information black hole” as journalists flee or stay away.

Fifty days of fighting in Gaza between Israel and the Palestinians over the summer saw at least four journalists and three media workers killed.

In Iraq, at least five journalists were killed, three while covering the fight against the Islamic State group.

The report also points out the first journalist killings in several years in some countries, including Paraguay, where three deaths were the first since 2007, and Myanmar, where the killing in custody of a freelance journalist was the first death since 2007.

CPJ says it is still investigating the deaths of at least 18 other journalists this year.