Nightmare before Christmas in Sydney ends in bangs, bloodshed 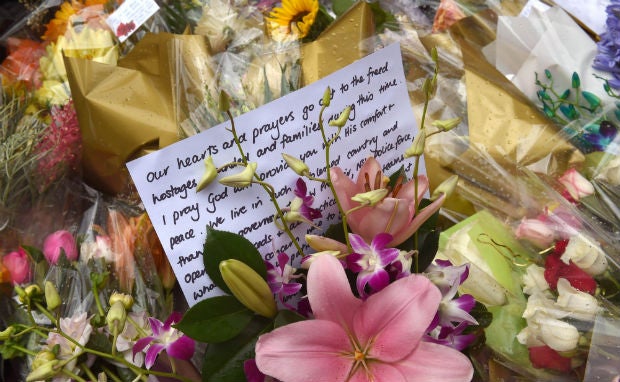 Messages are left on flowers at a floral memorial at the scene of a dramatic siege which left two hostages dead, as people in Sydney expressed shock and grief that something like this could happen in their easy-going city, in Sydney on December 16, 2014. Two hostages and an extremist Iranian-born gunman were killed in a siege that ended when armed police stormed a central Sydney cafe, as a shocked Australia struggled to come to terms with the tragedy. AFP

SYDNEY, Australia – It ended with gunfire and bloodshed.

Nearly 17 hours after a lone gunman unfurled an Islamic flag above a “MERRY CHRISTMAS” window sign and took customers and staff captive, the siege of a Sydney cafe ended early Tuesday with explosive bangs and flashes.

Some remaining hostages fled, terrified with their arms flung skyward.

Others were carried or stretchered out, as heavily armed police stormed into the Lindt cafe on Sydney’s Martin Place — home to the city’s financial center, state parliament and central bank.

Among them a woman carried out of the building by rescuers, her arms around their shoulders and a trickle of blood above a shoe-less foot. Another was stretchered away, a bloodied foot also bare.

“They are very brave people who in many cases were just buying a cup of coffee and they got caught up in this dreadful affair,” said state police commissioner Andrew Scipione.

A man dressed in a business suit and a tie watched from a doorway as a series of loud bangs and flashes went off as police readied to move in.

“It sounded like a chain of firecrackers on the scale of thunder,” wrote Sydney Morning Herald reporter James Robertson.

“The sound ricocheted throughout the tall buildings around the area… and hostages started pouring out of the building,” said ABC reporter Siobhan Heanue.

At the end of the operation, three people had been killed, including the hostage-taker, identified in the media as an Iranian-born “cleric” called Man Haron Monis. Of the 17 hostages, only six were left uninjured.

“Unbelievably overnight we have lost some of our own in an attack we never thought we would see here in our city,” said New South Wales Premier Mike Baird.

“The events that we have seen have shaken us, but they do not dampen our resolve.”

The cafe is one of the most popular on a thoroughfare that is thronged at this time of year with festive shoppers, in addition to everyday office crowds and tourists.

But on Monday, the pre-Christmas nightmare played out inside.

“It’s kind of shocking for everyone,” said local worker Goldie Jamshidi near the chocolate-themed cafe on Monday.

“I came to work and then I found out that this incident had happened,” she said.

The government in September raised its terror threat level and police conducted raids across the country, as authorities fretted that dozens of Australians who have fought alongside jihadists in Iraq and Syria could return home radicalized and inflict “lone wolf” attacks.

While the motives behind the siege were not known, police said the gunman acted alone.

In the days and weeks before Christmas, Sydney’s shopping district usually takes on an extra vigor as people buy presents for the festive season. Martin Place, with its huge Christmas tree, is a magnet for families.