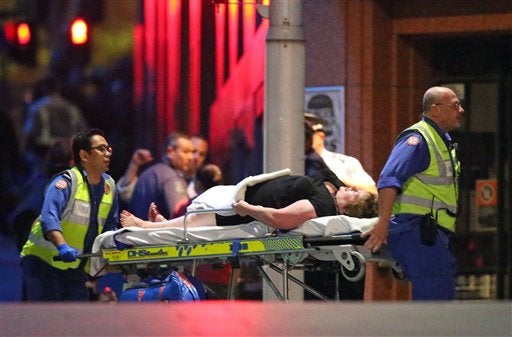 An injured hostage is wheeled to an ambulance after shots were fired during a cafe siege at Martin Place in the central business district of Sydney, Australia, Tuesday, Dec. 16, 2014. AP PHOTO/ROB GRIFFITH

SYDNEY—Sydney police said three people had died, including the gunman, during a hostage crisis that ended when officers stormed a downtown cafe.

Police said the 50-year-old gunman was killed in a confrontation with police early Tuesday morning. They said in a statement that a 34-year-old man and a 38-year-old woman also died. Four other people were injured.

Police said an investigation is underway because police were involved in an incident in which people died.

Heavily armed police stormed the cafe in the heart of Sydney, ending a siege by an Iranian-born gunman who had held an unknown number of hostages for more than 16 hours.–Kristen Gelineau