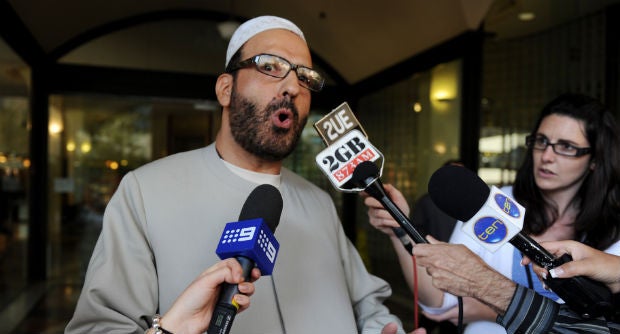 In this April 18, 2011 file photo of Man Haron Monis, believed to be the gunman inside the Lindt Cafe in Martin Place, speaks to the media as he leaves the Downing Center in Sydney after a pre-trial hearing where he is accused of sending offending letters to the families of soldiers killed in Afghanistan. Police decided to storm the Lindt Cafe early Tuesday Dec. 16, 2014 when they heard a number of gunshots from inside, and ended with a barrage of gunfire that left two hostages and the gunman dead, and four others wounded. AP/AAP Image, Dean Lewins

SYDNEY, Australia – An Iranian-born gunman who took hostages in a Sydney cafe was infatuated with extremism and mentally unstable, Australian Prime Minister Tony Abbott said Tuesday, calling the siege a “brush with terrorism”.

“He had a long history of violent crime, infatuation with extremism and mental instability,” Abbott said. “As the siege unfolded … he sought to cloak his actions with the symbolism of the ISIL death cult.”

The 50-year-old, widely named in the media as Man Haron Monis, took 17 people hostage at the Lindt cafe in central Sydney on Monday.

Abbott said he was well known to Australian authorities.

“We know that he sent offensive letters to the families of Australian soldiers killed in Afghanistan and was found guilty of offences related to this,” he said.

“We also know that he posted graphic extremist material online. Tragically, there are people in our community ready to engage in politically motivated violence.”

Abbott praised police for the way they acted, saying Australians “should be reassured by the way our law enforcement and security agencies responded to this brush with terrorism”.

“Plainly, there are lessons to be learned and we will thoroughly examine this incident to decide what lessons can be learned,” he said, adding that “it will take time to clarify exactly what happened in Martin Place and why”.