Hollande: fear of foreigners must be stanched 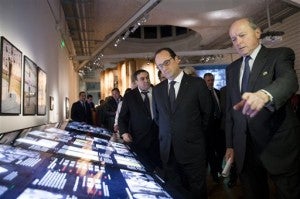 French President Francois Hollande, second right, with French Rights defender Jacques Toubon, right, look at the exhibition during a visit to the History of Immigration Museum in Paris, France, Monday, Dec. 15, 2014. President Francois Hollande has said that fear of foreigners must be stanched, tackling the anti-immigration far right as he lauded contributions of immigrants to France. (AP Photo/Yoan Valat, pool)

PARIS — President Francois Hollande on Monday praised the contributions that immigrants have made to France and criticized those generating fear of foreigners, an apparent reference to the growing voice and influence of the far-right National Front.

In his first speech about immigration since taking office in 2012, Hollande said an immigration policy is necessary to ensure both “dignity” for those it welcomes, and a cap on how many can be accepted.

He bemoaned the fact that acts of anti-Semitism and racism are on the rise in France and that some fear the “disappearance” of France, a reference to claims by the  and others that Islam will one day take over French civilization. Hollande noted that one in four French have at least one foreign ancestor.

“There are those who dream of a little France … a France turned inward,” Hollande said. “We must fight against these (ideas) in the name of France.”

Hollande spoke at the inauguration of the National Museum of the History of Immigration, which opened seven years ago but without a formal inauguration by then-President Nicolas Sarkozy. The delay is a sign of how contentious the subject of immigration is in France, which has the highest Muslim and Jewish populations in western Europe.

Hollande praised Europe’s large Schengen zone of passport-free travel — which the National Front wants to do away with — but said he plans to propose adjustments to make the area — 26 countries — more secure. He did not elaborate on that.