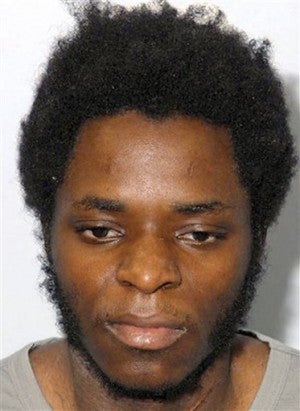 This undated file image released by the Metropolitan Police shows one of Lee Rigby’s killers, Michael Adebowale. Radical Muslim Michael Zehaf-Bibeau killed a soldier outside Canada’s parliament. Right-wing extremist Larry McQuilliams opened fire on buildings in Texas’ capital and tried to burn down the Mexican Consulate. Al-Qaida-inspired Michael Adebowale and an accomplice hacked an off-duty soldier to death in London. Police said the three perpetrators of recent attacks were terrorists and motivated by ideology. Authorities and family members said they may have been mentally ill. (AP ) Photo/Metropolitan Police, File)

LONDON — A radical Muslim killed a soldier outside Canada’s Parliament. A right-wing extremist opened fire on buildings in Texas’ capital and tried to burn down the Mexican Consulate. An Al-Qaida-inspired assailant hacked an off-duty soldier to death in London.

Police said all three were terrorists and motivated by ideology. Authorities and family members said they may have been mentally ill. A growing body of research suggests they might well have been both.

New studies have challenged several decades of thinking that psychological problems are only a minor factor in the making of terrorists. The research has instead found a significant link between mental problems and “lone wolf” terrorism.

Now academics and law enforcement officials are working to turn that research into tools to prevent deadly attacks.

“It’s never an either-or in terms of ideology versus mental illness,” said Ramon Spaaij, a sociologist at Australia’s Victoria University who conducted a major study, funded by the U.S. Justice Department, of lone wolf extremists. “It’s a dangerous cocktail.”

The study preceded Tuesday’s end to a deadly, 16-hour siege involving a gunman who took hostages in a cafe in Sydney. Prime Minister Tony Abbott said the gunman — Iranian-born Man Haron Monis — had “a long history of violent crime, infatuation with extremism and mental instability.”

With groups like Islamic State spreading violence in Syria and Iraq — and bloodthirsty rhetoric on the Internet — authorities around the world have issued increasingly insistent warnings about the threat posed by lone wolf attackers.

They can be difficult to stop with a counterterrorism strategy geared toward intercepting communications and disrupting plots.

Solo terrorism “doesn’t take an awful lot of organizing. It doesn’t take too many people to conspire together. There’s no great complexity to it,” London Police Chief Bernard Hogan-Howe told the BBC recently. “So what that means is that we have a very short time to interdict, to actually intervene and make sure that these people don’t get away with it.”

Police forces and intelligence agencies are examining whether insights from research by Spaaij and others could help.

Spaaij said a number of law enforcement and intelligence agencies have shown interest in his work. In Britain, a police counterterrorism unit is using a major study of lone wolf terrorists to develop risk-assessment analysis.

A British security official who spoke on condition of anonymity because he is not authorized to talk on the record said many attackers display warning signs, but that recognizing them is easier in retrospect. He said British intelligence officials are studying the link between mental illness and lone-actor terrorism.

Most people with mental health problems are neither terrorists nor violent, and mental illness alone can’t explain lone wolf attackers. Some experts dispute whether there is a link at all.

deadly attack on a soldier Oct. 22 in Ottawa, Jocelyn Belanger, a psychology professor at the University of Quebec at Montreal, told the Canadian Senate’s national security committee that “to believe that radicalized individuals are crazy or not playing with a full deck will be our first mistake in developing effective counterterrorism strategies.”

But the new research suggests that solo terrorists are much more likely to have mental health problems than either members of the general public or participants in group terrorism.

Spaaij and Mark Hamm of Indiana State University studied 98 lone wolf attackers in the U.S. They found that 40 percent had identifiable mental health problems, compared with 1.5 percent in the general population.

Their conclusion? Mental illness is not the only factor that drives individuals to commit terrorist acts, but it is one of the factors.

Spaaj said mental illness can play a part “in shaping particular belief systems and in constructing the enemy, externalizing blame for one’s own failure or grievances onto this all-threatening enemy.”

A second study by Paul Gill and Emily Corner of University College London looked at 119 lone wolf attackers and a similar number of members of violent extremist groups in the U.S. and Europe. Almost a third of the lone wolves — nearly 32 percent — had been diagnosed with a mental illness, while only 3.4 percent of terrorist group members were mentally ill.

“Group-based terrorists are psychologically quite normal,” the researchers said. They said one reason may be that terrorist recruiters are likely to reject candidates who appear erratic or mentally ill.

He and Corner are working with a British counterterrorism unit as police try to develop ways of distinguishing genuine threats from hot-headed talk. The unit declined to discuss the project, but recent cases suggest determining who really is a threat is fraught with difficulty.

More than a year before he hacked a soldier to death in London in 2013, Michael Adebowale’s online extremism drew the attention of Britain’s intelligence services.

Domestic intelligence agency MI5 told a parliamentary inquiry into the murder that it uses a range of factors to assess the threat from potential lone wolves, including an inability to cope with stress and anxiety, social isolation and mental health problems.

MI5 agents suggested that Adebowale — who is now serving a life sentence in a psychiatric hospital — be assessed by the agency’s Behavioral Science Unit, a team of psychologists and social scientists, but the assessment was never done. The lawmakers’ report called that a missed opportunity, and recommended that “MI5 should ensure that the unit’s advice is integrated more thoroughly into investigations.”

Signals also were misread in the case of Nicky Reilly, a 22-year-old convert to Islam who walked into a restaurant in the English town of Exeter in 2008 with a homemade bomb. The device went off in the restroom, injuring Reilly and no one else.

At his trial, jurors were told that Reilly had learning difficulties and had had many years of contact with mental health services. In 2003, he talked to a psychiatrist about making a bomb. The information was passed on to the police, who judged that Reilly wasn’t a serious threat.

American authorities, in contrast, have been accused of being too aggressive in pursuit of lone attackers. The FBI has foiled several alleged attacks through sting operations in which agents posed as terror supporters, supplying advice and equipment. Critics say the strategy can amount to entrapment of mentally vulnerable people who wouldn’t have the wherewithal to act alone.

Meanwhile, the fundamental question of whether there is a link between mental health problems and terrorism remains controversial.

The most lethal lone-wolf attacker in recent years was anti-Muslim extremist Anders Behring Breivik, who killed 77 people in a bombing and gun rampage in Norway in 2011. Breivik was unrepentant. One psychiatric report found him to be insane, while a second concluded that he was sane — and judges agreed, sending him to prison indefinitely.

The killer was happy with the outcome. For Breivik, it was recognition that his views were legitimate and not those of a madman.