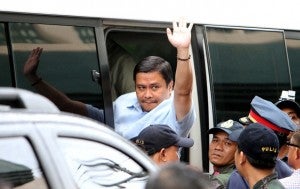 MANILA, Philippines – The Sandiganbayan Fifth Division has inhibited itself from hearing the plunder and graft charges of Senator Jinggoy Estrada related to the pork barrel scam.

In a letter dated December 10 addressed to Presiding Justice Amparo Cabotaje-Tang, the division said it was inhibiting due to personal reasons.

“May we request for our recusal in the above-indicated criminal cases for personal reasons,” said the letter signed by Division Chair Associate Justice Roland Jurado, and members Associate Justices Alexander Gesmundo and Ma. Theresa Dolores Gomez-Estoesta.

The division had been hearing the bail proceedings of Estrada from plunder since July.

Executive clerk of court Atty. Renato Bocar said the Sandiganbayan en banc would decide on the request next year.

He said only one of the Fifth Division justices attended Monday’s en banc session but refused to mention the personal reasons behind the refusal.

He said Estrada’s cases would have to be re-raffled to another division if the en banc accepts the fifth division’s inhibition.

Bocar added that to prevent this from setting a precedent, the Sandiganbayan next time  will leave such requests to the Supreme Court to decide.

Estrada faces plunder and graft charges before the court for his alleged involvement in the purported diversion of his Priority Development Assistance Funds to ghost projects.

Sandiganbayan: Jinggoy Estrada to be detained with Bong Revilla