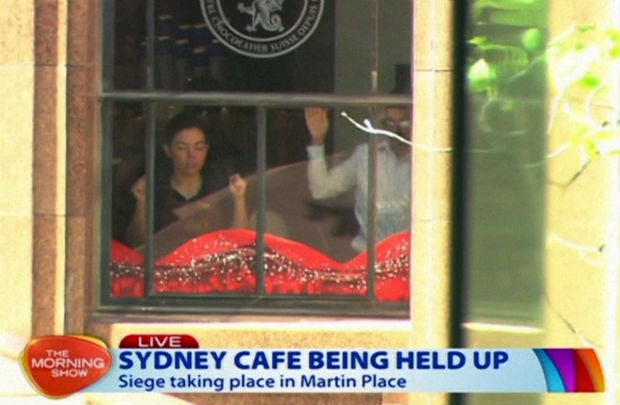 This image taken from video shows people holding up hands inside a cafe in Sydney, Australia Monday, Dec. 15, 2014. A gunman took an unknown number of people hostage inside the downtown Sydney chocolate shop and cafe at the height of Monday morning rush hour, with two people inside the cafe seen holding up a flag believed to contain an Islamic declaration of faith. AP/Channel 7 via AP Video

SYDNEY — Five people have fled from a Sydney cafe where a gunman took an unknown number of hostages at the height of Monday morning rush hour. Two people inside the cafe were earlier seen holding up a flag containing an Islamic declaration of faith.

The first development came six hours after the hostage crisis began, when three men were seen running from a fire exit of the Lindt Chocolat Cafe in downtown Sydney.

Shortly afterward, two women, one after another, sprinted from the cafe and into the arms of heavily armed police. Both were wearing aprons with the Lindt chocolate logo, indicating they were cafe employees.

“We do not have any information that suggests that anybody is harmed at this stage,” New South Wales Police Deputy Commissioner Catherine Burn said, after the first three hostages had emerged.

St. Vincent’s hospital spokesman David Faktor said a male hostage was in a satisfactory condition in the hospital’s emergency department. He was the only one of the freed hostages to be taken to a hospital.

“He’s in a satisfactory condition, so he’s sitting up and that’s all we can give out. We can’t talk about the reason for his presentation,” Faktor said.

It was not clear how many people remained inside the cafe located at Martin Place, a plaza in the heart of the city’s financial and shopping district that is packed with holiday shoppers this time of year. Many of those inside the cafe would have been taken hostage as they stopped in for their morning coffees.

“We have not yet confirmed it is a terrorism-related event,” Scipione said. “We’re dealing with a hostage situation with an armed offender and we are dealing with it accordingly.”

Burn said that police negotiators have made contact with the gunman.

Hundreds of police flooded into the area, streets were closed and offices evacuated. The public was told to stay away from Martin Place, home to the state premier’s office, the Reserve Bank of Australia, and the headquarters of two of the nation’s largest banks. The state parliament house is a few blocks away.

Television footage shot through the cafe’s windows showed several people with their arms in the air and hands pressed against the glass, and two people holding up a black flag with the Shahada, or Islamic declaration of faith, written on it.

The Shahada translates as “There is no God but Allah and Muhammad is His messenger.” It is considered the first of Islam’s five pillars of faith, and is similar to the Lord’s Prayer in Christianity. It is pervasive throughout Islamic culture, including the green flag of Saudi Arabia. Jihadis have expropriated the Shahada in their own black flag.

“This is a very disturbing incident,” Prime Minister Tony Abbott said. “It is profoundly shocking that innocent people should be held hostage by an armed person claiming political motivation. ”

Heavily armed officers were lined up outside the cafe, and a man with a backpack inside the cafe could be seen walking back and forth in front of the glass doors.

“Police have been in attendance and have controlled the situation from very early this morning,” said Scipione, the police commissioner.

Lindt Australia posted a message on its Facebook page thanking the public for its support.

“We are deeply concerned over this serious incident and our thoughts and prayers are with the staff and customers involved and all their friends and families,” the company wrote.

The government raised Australia’s terror warning level in September in response to the domestic threat posed by supporters of the Islamic State group. Counterterror law enforcement teams later conducted dozens of raids and made several arrests in Australia’s three largest cities — Melbourne, Sydney and Brisbane. One man arrested during a series of raids in Sydney was charged with conspiring with an Islamic State leader in Syria to behead a random person in downtown Sydney.

The Islamic State group, which now holds a third of Syria and Iraq, has threatened Australia in the past. In September, Islamic State group spokesman Abu Mohammed al-Adnani issued an audio message urging so-called “lone wolf” attacks abroad, specifically mentioning Australia. Al-Adnani told Muslims to kill all “disbelievers,” whether they be civilians or soldiers.