Who will be in charge of PNP during Purisima suspension? | Inquirer News
Close
menu
search

Who will be in charge of PNP during Purisima suspension? 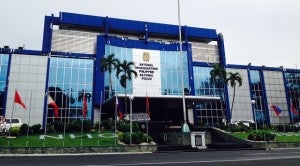 The Philippine National Police headquarters in Camp Crame: Who will be leading the PNP with the suspension of Director General Alan Purisima? Inquirer file photo

The Department of Interior and Local Government (DILG) and the PNP leadership have yet to decide who will replace Purisima after the Ombudsman had ordered a six-month preventive suspension against the beleaguered PNP chief.

But Senior Superintendent Robert Po, deputy PNP spokesperson, said in a briefing Friday that based on law, the second in ‎rank, Deputy Director General Felipe Rojas, will take the post Purisima will be temporarily vacating.

Rojas, however, will retire on Dec. 8, Monday–the day Purisima is expected to return to the country from the Kingdom of Saudi Arabia (KSA) on official travel. The conference in KSA was supposed to end on Tuesday, Dec. 9, but a police official who requested anonymity said that Purisima might cut short his business trip.

“It just so happened that Rojas is retiring. If you follow the chain of command, Espina will take over as deputy chief for administration. Garbo will occupy the position vacated by Espina,” Po said.

Deputy Director General Leonardo Espina, deputy chief for operation, is third in rank. He will retire in July 2015.

“It’s usually the next in command who is the designated officer-in-charge. By operation of law, usually the OIC is second in command,” he said.

“There is an OIC designated. It’s Rojas until Sunday.”

He also made clear that the person replacing Purisima will only hold the OIC title, not the acting PNP chief.

“Acting PNP chief can reassign, assign and relieve officers. The OIC cannot even discipline as commander,” he explained.

Po said that the OIC’s duty is to continue the PNP chief ‘s work minus his power to appoint, designate and reassign police officers.

But Po said Purisima can’t leave his post until he returns to the Philippines. ‎The DILG, of which the PNP is an attached agency, has five days to implement the suspension.

“If the order is for the chief PNP and the chief PNP is not yet here, it can’t be served. We will have to wait for him,” he added.

On Thursday, the PNP vowed to exhaust all “legal and necessary”‎ legal remedies in response to the preventive suspension.

Roxas: PNP will continue its functions despite Purisima suspension