Roxas: PNP will continue its functions despite Purisima suspension

MANILA, Philippines–Interior Secretary Manuel “Mar” Roxas II ‎said on Thursday that he would not comment on the suspension of Philippine National Police (PNP) chief Director General Alan Purisima until he has a copy of the order from the Office of the Ombudsman.

In a statement, Roxas said that while the PNP chief is suspended for six months, he assures the public that the PNP will continue to focus on its duties and functions.

PNP is one of the attached agencies of the Department of Interior and Local Government. 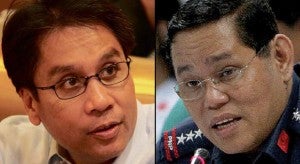 The Ombudsman on Thursday ordered Purisima to be suspended preventively pending the investigation on ‎the allegedly anomalous contract he entered into with firearms license courier service WERFAST Documentation Agency.

‎”The PNP is likewise focused on its disaster preparedness preparations for the impending arrival of typhoon ‘Ruby’ (international name: Hagupit),” he said.

‎”Accordingly, the PNP is on heightened alert and all leaves have been canceled in the expected affected areas,” he added.

Roxas also noted that Purisima is currently in the Kingdom of Saudi Arabia “representing the PNP in its international commitments.”