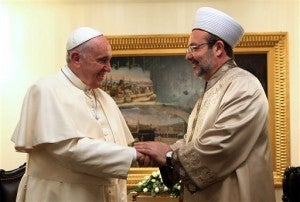 COTABATO CITY–Pope Francis’ visit next month could become an opportunity to strengthen dialogue between Christians and Muslims, Governor Mujiv Hataman of the Autonomous Region in Muslim Mindanao said.

With this in view, Hataman urged the country’s Muslim religious sector to form an official delegation to meet the Pope as they did in 1981, when Pope John Paul II made his first visit to the country.

At that time, Filipino muftis (Islamic scholars who interpret or expound Islamic law) and ulama (Muslim legal scholars) met with Pope John Paul II at the University of Sto. Tomas in Manila.

Hataman said a meeting between Pope Francis and Filipino religious leaders could show that dialogue was the better option between followers of various religions.

“Even the Prophet Muhammad in his time encouraged dialogue with followers and leaders of other religions,” he said, noting that the prophet’s companions also had fruitful exchanges with a famous Christian king, the Negus of Abyssinia.

Hataman said the prophet always respected Christians by referring to them as “Adhjal Qitaab” or “People of the Book” and not Kafir (unbeliever).

Aside from forging better relations, the country’s Islamic leaders could also demonstrate that the path to real Islam was peace and not the ideology that the Islamic State in Iraq and Syria has been spreading.

Hataman said he believed that muftis and ulama–including those in the country–have sincerely condemned the ISIS group in several religious and scholarly articles on Islam.

“Last Friday, the Pope urged Muslims in Turkey to strengthen cooperation (between religious groups) to put a stop to the violence perpetrated by people who misinterpret religions,” Hataman added.