This was the call of Manila Archbishop Luis Antonio Cardinal Tagle to the Catholic faithful on Wednesday, saying Pope Francis would visit the Philippines not only to inspire Filipinos but to draw inspiration from them. 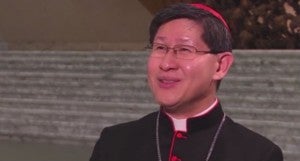 “I hope the Holy Father will be inspired and learn from us, too. He will come not only as a teacher but also as someone in need of inspiration, so let’s inspire him,” Tagle said during the recollection meant to “spiritually prepare” media practitioners and other participants to the papal visit.

In a previous statement, Tagle said Pope Francis has expressed admiration for the Filipinos’ faith and resilience.

“I think he will come to bring a message of solidarity and hope. But I’m also quite certain that he would want to imbibe, be edified and be inspired by the faith of the ordinary people,” he said.

Meanwhile, Asian bishops will be flying in to the country to attend the Holy Father’s Mass with the clergy and religious at the Manila Cathedral on Jan. 16, 2015,” said Pasig Bishop Mylo Hubert Vergara, head of the Catholic Bishops’ Conference of the Philippines (CBCP) Commission on Mass Media, in a press briefing.

Vergara clarified that the Mass at the Manila Cathedral is not just for the clergy of the Archdiocese of Manila.

“All dioceses will be represented in that Mass … It is upon the decision or process of each particular church (diocese), as we call it, to send their own representatives,” he added, saying that each diocese and prelature was asked to send 10 representative priests and five religious.

To be completely fair, the Pasig bishop said that in his own diocese, as in other dioceses, these representatives were chosen by lottery.

According to Manila Cathedral Msgr. Nestor Cerbo, 1,500 slots have been allotted to bishops, priests and religious for the Eucharistic celebration with Pope Francis on the second day of his visit.

The remaining 500 slots will be for lay people needed for the liturgical celebration like the choir; the technical support staff for the sound system and the air conditioning; members of the Presidential Security Group; the first aid team; ushers; and selected members of the media.

Vergara said the Central Committee would try its best to put up facilities like video walls or LCD screens outside the Manila Cathedral to accommodate the faithful who might want to witness and participate in the Eucharistic celebration.