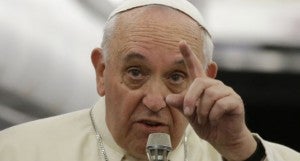 MANILA, Philippines—A representative from Leyte, the worst-hit province during Supertyphoon “Yolanda” (international name: Haiyan), appealed to his fellow politicians not to promote themselves during the visit of Pope Francis.

The lawmaker made the statement after Manila Archbishop Luis Antonio Cardinal Tagle appealed to politicians not to use the papal visit to campaign for the 2016 elections.

Romualdez himself is eyeing a Senate seat in 2016. He is also the national president of the Lakas-Christian Muslim Democrats.

“What caught the attention of the Holy Father was Typhoon Haiyan. He saw the destruction. Gusto niya makiramay din (He wants to condole with the victims),” Romualdez said.

“I think there is nothing wrong with welcoming the Pope by displaying banners. But I hope the banners will not be used to promote oneself. When the banner says ‘Welcome, Pope’ but if it carries a picture of somebody else, that’s different,” Tagle said

Romualdez, the nephew of the late strongman Ferdinand Marcos’ wife Imelda, is also the cousin of Tacloban Mayor Alfred Romualdez, who figured in a political rivalry with Interior Secretary Mar Roxas at the onslaught of Yolanda in 2013.

In his January visit next year, Pope Francis is set to spend a day with the victims of Yolanda in Tacloban and Palo, Leyte. Yolanda, the world’s strongest typhoon to hit land, claimed over 6,000 lives.

The Pope will hold a Mass at Tacloban International Airport on January 17, and then will join survivors of Yolanda for lunch at the Archbishop’s Residence in Palo town. He will then have lunch with some 30 survivors of the worst calamities that hit the country last year. This will be followed by the blessing of the Pope Francis Center for the Poor at 3 p.m.

The pope will then meet with priests, members of the religious community, seminarians and families of Yolanda survivors at the Cathedral of Palo.

Read Next
Thousands of Mindanao residents still waiting for promised homes 2 years after typhoon
EDITORS' PICK
Smart celebrates all kinds of ‘#SimplyLove’ for Pride Month
WATCH: INQside Look with Fil-Am actress Aina Dumlao
SWS: Over 12M Filipinos still jobless as of May 2021
SANTIS Delicatessen: The road to survival is sweet and savory
Smart brings KCON:TACT especially 4U to subscribers from June 19 to 27
Dizon: 40 of 119 ‘Build’ projects done by 2022
MOST READ
William Martinez sometimes feels his kids ‘don’t remember’ him anymore
De La Hoya warns Spence: Be careful of Pacquiao
Mayor vs mining ‘guilty of oppression’
DOTr expects SMC’s P735-B airport project to break ground within next 60 days
Don't miss out on the latest news and information.