TAGUM CITY, Davao del Norte – Exactly two years after one of the strongest storms to ever hit the Philippines leveled two provinces in Southern Mindanao, thousands of survivors are still waiting for the government to build the new homes they were promised, officials here admit.

“We’ve been making progress but the sheer number of houses that have to be built is so great that we simply can’t finish them in two years,” said Compostela Valley Gov. Arturo Uy.

The province suffered the most in terms of loss of lives and property when Typhoon Pablo struck on Dec. 4 two years ago. At least 27,000 houses were destroyed in 11 municipalities, Uy said.

The other province that was hit hard was Davao Oriental.

President Aquino, in his fourth state-of-the-nation address last year, said the government was to build 53,106 houses in the places devastated by Typhoon Pablo (international name: Bopha) by 2014. 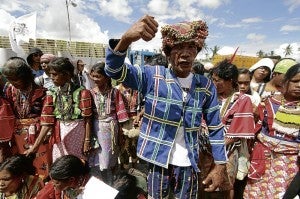 Aquino ordered the creation of a task force to spearhead the rehabilitation of the two typhoon-stricken provinces, with the national government allocating some P10 billion for the reconstruction and rehabilitation effort.

National agencies such as the Department of Social Welfare and Development and the National Housing Authority were the main implementers of the housing program for the typhoon survivors.

For Compostela Valley, the government targeted to build 15,000 homes in the original sites of the houses that were destroyed and 12,000 others in resettlement areas.

Uy said it would be impossible to finish the shelter component by yearend.

“We expect… to be able to complete the shelters by June next year,” Uy said.

The governor also cited contributions from non-governmental organizations to the rehabilitation effort.

So far, the DSWD’s Modified Shelter Assistance Program has completed 1,600 houses in the province, way below the target of 12,000.

Priscilla Razon, DSWD Southern Mindanao director, said factors such as rising cost of construction materials, a ban on government projects during the 2013 mid-term elections and delays caused by foul weather affecting the region such as low-intensity storm “Agaton” last January, have pushed back the expected completion of the construction to 2015.

In Davao Oriental, the MSAP is implementing the building of 10,173 units at a cost of P1.340 billion. As of Nov. 22, at least 2,779 houses have been completed and turned over to beneficiaries in the hard-hit towns of Cateel, Boston and Baganga, records from the provincial government showed.

For its part, the NHA also built some 10,000 duplex-type housing units in eight affected towns in the two provinces.

Lawyer Chito Cruz, NHA general manager, said the agency was to build a total 17,202 houses in the two Southern Mindanao provinces, with about 14,000 of the P220,000-worth duplexes to be constructed in Compostela Valley while the rest in nearby Davao Oriental.

“We were tasked to ‘build back better’ so (typhoon survivors) would have more safe and quality homes,” said Cruz.

Davao Oriental Gov. Corazon Malanyaon said she was grateful for the national government’s efforts in helping her province recover.

“All these remarkable development in the hard-hit towns would not have been possible without the national government backing up our rehabilitation efforts,” Malanyaon said.

“They truly became instrumental in our fast recovery and helped us stand on our feet to move on and move up,” she added.