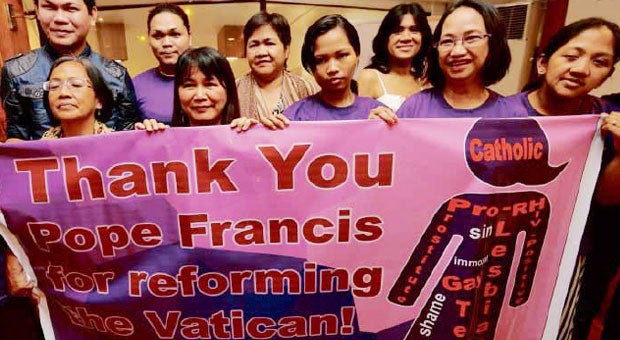 THANKS TO THE POPE Members of various groups demanding an end to discrimination against socalled “social outcasts” welcome the forthcoming visit to the Philippines of Pope Francis. RAFFY LERMA

For 20 years, Elena Felix has been experiencing discrimination for having the virus that causes AIDS (acquired immune deficiency syndrome).

A former migrant worker in the Middle East, Felix, 56, was diagnosed with the AIDS-causing human immunodeficiency virus (HIV) in 1994 when she came back to the Philippines to renew her work visa. As the virus has been suppressed with drugs, Felix has not developed full-blown AIDS.

“I was once called ‘Bagong Bayani’ because I was bringing in dollars,” she said in Filipino.

But when she came back with HIV, people told her, “Nakakadiri, bagay sa’yo yan kasi makati ka (Disgusting, you deserve that because you’re promiscuous),” added Felix, a member of Babae Plus, a support group for women with HIV.

Inspired by Pope Francis’ mercy and compassion for “outcasts,” such as the lesbian, gay, bisexual and transgender (LGBT) community, Felix hoped the Pope’s visit next year would change Filipinos’ attitude toward people afflicted with either HIV or AIDS and that the Pope would call on the church to accept and “embrace us as a human and as a woman.”

In a press conference on Monday, the Catholic for Reproductive Health (C4RH), Babae Plus, Kapederasyon and Peer Educators Movement for Empowerment of Pasay, Manila, Caloocan and Quezon City (Pamac-Q) thanked Pope Francis for his reforms and for reaching out not only to Catholics in different parts of the world but to those who belong to other sects and religions.

“We hope that our bishops and Catholic leaders will follow his footsteps and that they truly become a Church for the Poor,” said Luz Francess Chua, C4RH executive director.

The group wants the Catholic Church to take care and prioritize the concerns of the poor and to accept everyone, not judge anyone based on sexual orientation, status and advocacy, Chua said.

“We want to stop the discrimination against outcasts like the LGBT, the HIV/AIDS positive, unwed mothers and reproductive health advocates like us,” she added.

Chua said they plan to send an open letter to the Pope asking him, among other things, to advise the Catholic Bishops’ Conference of the Philippines (CBCP) to remove a clarificatory note issued by then CBCP president Nereo Odchimar on May 17, 2011, at the height of the reproductive health debate.

“The Church does not recognize the C4RH as a genuine Catholic association or organization in accordance with Canon Law. Any Catholic who freely identifies himself or herself with this group gravely errs,” the note read.

Even after the reproductive health bill was passed into law, Chua said that some of the religious were still cautious in dealing with them because of the pastoral letter.

Aian Perucho, founding core member of the LGBT group Kapederasyon, also wished that gays like him would be treated with respect and that people would stop labeling them as “salot (plague).”

The LGBT community rejoiced when Pope Francis said “Who am I to judge,” when asked to comment in an interview last year about gay people, Perucho said.

Bishops in the country should treat LGBT people the same way as they do others, he added. But sadly, “the Church intensifies discrimination against us.”

Chua said: “Do not play on a guilt trip. We already have so much guilt. Let the Church be a sanctuary. Encourage people to go to church. Let it be a place of inspiration where we can unburden ourselves. Just like Pope Francis, help us unburden.”

Metro Manila accounts for nearly half of new HIV-AIDS cases

Elton John at AIDS event: Pope Francis is my hero