MANILA, Philippines–Filipino peacekeepers from Liberia who were kept under quarantine for 21 days on Caballo Island will be exempted from the military’s red alert for the preparations for Typhoon “Ruby” (Hagupit).

“I understand that the Chief of Staff declared red alert as of 12 noon. In my brief meeting with the President, I asked permission for you to be exempted from the red alert,” Defense Secretary Voltaire Gazmin said on Thursday at the hero’s welcome for the military peacekeepers at Camp Aguinaldo, which drew cheers from the audience.

All the 108 military peacekeepers will enjoy a “breakthrough” or both Christmas and New Year breaks. In the military, the holiday break is usually between December 20 and January 3. It is divided into two in order to have enough personnel on duty while the others take their break. 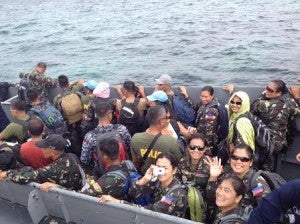 Filipino peacekeepers from ebola-stricken Liberia, who were quarantined on Caballo island for three weeks, head to Manila as their quarantined period ended on Tuesday. AFP/ MAJ. GERARD ALVARAN

Sergeant Neil Villanueva, one of the peacekeepers, said he was happy they would get to enjoy both breaks.

“I will bond with my family,” said Villanueva, a father of two. It will be the first time he will spend Christmas with his daughter as she was only six months old when he left almost a year ago.

The military went on red alert nationwide on Thursday noon as part of its preparations for Ruby.

“These peacekeepers showed once again the heroism, bravery, and commitment of our soldiers. I am happy for them that they can now formally join their families after their long tour in Liberia and the quarantine period they had on Caballo Island,” AFP chief of staff General Gregorio Pio Catapang Jr. said.

The peacekeepers were awarded with United Nations Service Medals for their almost a year of stay in Ebola-stricken Liberia.

They arrived in the country on November 12 and were quarantined for three weeks as precautionary measure. They have already passed the Ebola screening by the UN before their repatriation.

Last November 14, a peacekeeper was brought to Manila from Caballo Island for observation after suffering from fever which turned out to be malaria.

On Nov. 24, another peacekeeper was brought to V. Luna Medical Center in Quezon City for hypertension after playing basketball.

The hero’s welcome also coincided with the lighting of the giant Christmas tree at Camp Aguinaldo. It was followed by a 10-minute firework display.

AFP on red alert for ‘Ruby’