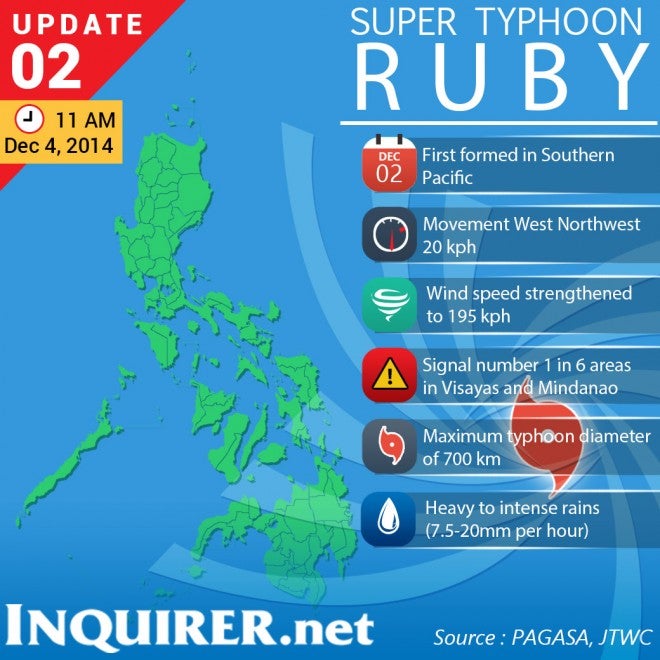 MANILA, Philippines — Typhoon “Ruby” (international name: Hagupit) is expected to hit Eastern Visayas on Saturday morning as the state weather bureau said that chances that it would change course was already “slim.”

“Majority of (international weather agencies) predict that it will make landfall in Eastern Visayas,” the Philippine Atmospheric, Geophysical and Astronomical Services Administration (Pagasa) said in a press briefing.

Supertyphoon “Yolanda” made landfall in the region when it hit the country in November of 2013 and caused massive destruction and deaths of more than 6,000.

At the press briefing, the Pagasa said Ruby had intensified and was already packing maximum sustained winds of 195 kilometers per hour (kph) and gustiness of up to 230 kph. It however slowed down to 20 kph from 30 kph while moving west northwest.

The Joint Typhoon Warning Center (JTWC) of the US Navy classified Ruby as a supertyphoon with maximum sustained winds of 155 knots (287 kph) and gusts of 190 knots (351 kph). This was based on one-minute average wind speed over open water.

As of 10 a.m., the center of Ruby was located 860 kilometers east of Surigao City. It entered the Philippine area of responsibility at about 2 a.m., Thursday.

If Ruby maintained its strength, it could create storm surges as high as three to four meters, which are smaller than Supertyphoon “Yolanda’s” five to seven meters.

Red alert up as PH braces for ‘Hagupit’