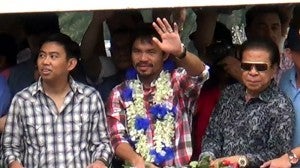 MANILA, Philippines–It may be more than a year to go but 2016 is looking like a target for one of Manny Pacquiao’s jabs.

During a press conference at the Hotel Intercontinental in Makati City Thursday noon, Pacquiao said he was considering running for a position in 2016 but he first wanted to focus on the task at hand as the congressman of Sarangani province.

“I’m considering it, 2016, but it’s still too far away,” Pacquiao said after his victory parade with Makati Mayor Junjun Binay. “My decision, though, is not yet final if I will run for a national position.”

Vice President Binay earlier said he was courting Pacquiao to run as senator under his United Nationalist Alliance.

Pacquiao on Thursday said he would first concentrate on the matter at hand and not the near future.

“I must fulfill my responsibilities as a congressman, as a boxer and as a family man.”

Binays team up for Pacquiao

Binay asks Pacquiao to run for senator in UNA slate