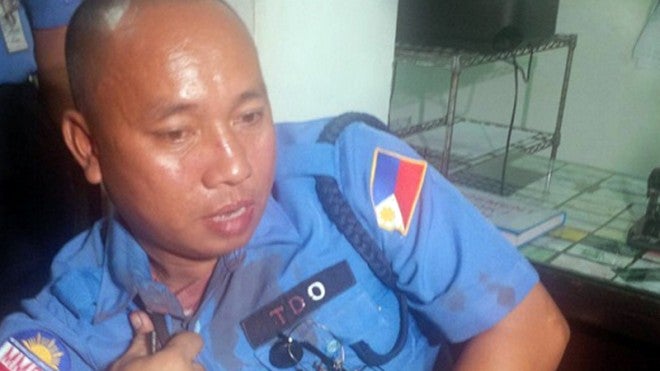 MANILA, Philippines – The driver of a luxury sports car reportedly mauled and dragged a traffic enforcer of the Metropolitan Manila Development Authority (MMDA) for taking a picture of him making an illegal turn in Quezon City on Thursday morning.

In an interview with Radyo Inquirer 990 AM, enforcer Jorby Adriatico‎ described the driver as in his 30s who drove a blue car that did not have any license plates.

A fellow traffic enforcer of Adriatico caught the incident on video.

Based on the video, Quezon City traffic officers, who investigated the case, later identified the suspect’s car as a “Marshall Maserati,” a luxury sports car.

According to Adriatico, the car drove up from G. Araneta Avenue from the direction of Talayan Village and tried to make a left turn on Quezon Avenue, which was not allowed.

However, Adriatico said, the Maserati still made a left.

“Motorists weren’t allowed to take a left turn on the Araneta intersection so I tried to take a picture of him as he turned left,” Adriatico said.

“When he saw me taking a photo, he made a U-turn and drove back to where I was standing,” he added.

Adriatico said the driver, who was accompanied by a man also in his 30s, gave him the dirty finger and snatched his cellphone.

From inside the car, the driver then grabbed Adriatico by the ‎neck, punched him and sped off toward Edsa, with the traffic enforcer getting dragged beside the car.

The enforcer said he was forced to run alongside the sports car which ran between 30 to 40 kph.

When they reached the corner of Quezon Avenue and Scout Chuatoco, the driver dumped the traffic enforcer on the road‎ before speeding off with his cellphone.

Adriatico sustained a fracture on the nose‎.

Authorities are trying to identify the owner of the car.