DPWH explains cause of delays in road projects 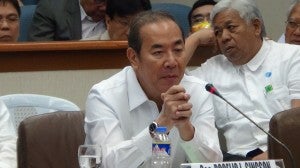 “The presence of utilities, right-of-way problems and limited work areas to minimize the use of roadways.”

Public Works Secretary Rogelio Singson cited these issues as the “causes of delay” in the completion of various road projects in Metro Manila, which are perennially blamed by many for the daily traffic jams.

It was a brief response Singson made via text message to the Inquirer on Friday, after it was reported that Metropolitan Manila Development Authority (MMDA) Chair Francis Tolentino had asked the Department of Public Works and Highways (DPWH) to explain the delays.

The MMDA cited the unfinished projects as a reason why it had yet to draw up the list of this year’s Christmas lanes, since some of the roads being considered are still affected by DPWH activities.

Another DPWH official, who asked not to be named for lack of authority to speak to media, also claimed that “slow and poor-performing private contractors” share the blame.

The MMDA itself also contributes to the delay since it has the final say in the issuance of permits to road projects, the official said.

According to a DPWH-NCR report, its road repair teams are currently rushing the completion of several projects in time for the coming Yuletide season.

About seven projects are expected to be finished by Dec. 15, it said. These include the northbound and southbound lanes of Taft Avenue from P. Ocampo Street to the Pasay City boundary; Muelle de Magallanes in Manila’s fifth district; President Quirino Avenue in Paco, Manila; Tandang Sora Avenue from Quirino Highway to Commonwealth Avenue in Quezon City; Hemady Street, N. Domingo Street, Salgado Street, and Kamias Street, also in Quezon City, and Pioneer Street from Buayang Bato Creek to William Street in Mandaluyong City.

Road improvement works along Roxas Boulevard—from P. Burgos Street to Teodoro M. Kalaw Street—are expected to be completed by Dec. 31 in time for Pope Francis’ scheduled visit to the Philippines in mid-January, the report also said.

Meanwhile, the DPWH suspended road works along Bonifacio Drive in Intramuros, Manila, to decongest traffic in the Port Area.

But as earlier announced by the MMDA, ongoing DPWH projects will be suspended three weeks before Christmas so as not to aggravate the holiday traffic.