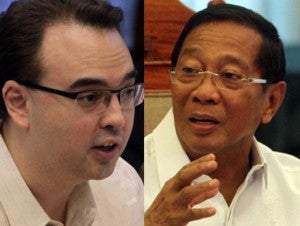 MANILA, Philippines—Sen. Alan Peter Cayetano, one of the three senators leading the investigation into alleged anomalies in Makati City, has revealed that a Makati lawyer with links to embattled Vice President Jejomar Binay has been dangling P5 million to P20 million to suppliers for any information of anomalous projects in Taguig City.

“The lawyer is willing to give P5 million to P20 million for any information of any anomalies during the time of my wife,” the senator said, referring to Taguig City Mayor Lani Cayetano.

In essence, the lawyer “is buying information” from two to three suppliers, he added in a phone interview on Friday.

The suppliers have refused to identify the lawyer since they also had contracts with the Makati City government, but Cayetano believed the lawyer was from the Binay camp.

“Instead of answering the issues, they’re trying to discredit the people investigating them, and the irony is that Binay was always hitting GMA (former President Gloria Macapagal-Arroyo) for doing that method,” he said.

Binay has been skewered in the Senate Blue Ribbon subcommittee for anomalies that he allegedly committed while Makati City mayor.

It was his estranged ally, former Makati Vice Mayor Ernesto Mercado, who has provided most of the testimonies and documents linking Binay to the anomalies.

Apart from building a pricey P2.28-billion Makati City Hall extension and car park, Binay has been accused of owning a P1.2-billion high-end farm in Batangas and, recently, of owning condominiums through dummies.

The Vice President, who has snubbed the inquiry, has denied the charges and has dismissed the hearing as a forum to vilify him ahead of the 2016 presidential election.

Cayetano, who along with subcommittee chair Sen. Aquilino Pimentel III and Sen. Antonio Trillanes IV presides over the inquiry, doubted his critics could dredge up any anomalies against his wife.

He said that his wife had adopted measures to make services by the IT, security and garbage companies efficient but also cheaper.

“I’m not saying that there is no corruption at all, but I can say that she will hunt down anyone who is engaging in corruption in Taguig,” Cayetano said.

Binay can be ‘investigated, charged, tried, and even convicted’—Cayetano

Palace on Binay-Cayetano feud: ‘We have other priorities’