Binay camp: Debate with Trillanes a ‘disservice’ to ‘Yolanda’ survivors 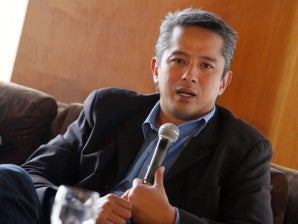 MANILA, Philippines – A spokesperson of Vice President Jejomar Binay said Tuesday that the vice president cancelled the scheduled November 27 debate with Senator Antonio Trillanes IV upon realizing that it is a “disservice” to the survivors of Super Typhoon “Yolanda.”

Cavite governor and Binay’s spokesperson on political affairs Jonvic Remulla said that the vice president is prioritizing “recovery over bickering.”

“The Vice President realized that engaging a debate with Senator Trillanes is a disservice to the millions who still have to recover from the Yolanda tragedy. Now is not the time for talk but for action. The Vice President is prioritizing the country over self, recovery over bickering, the people over himself,” Remulla said in a statement.

Remulla said that Binay will fly to Visayas next week to assist in housing efforts as part of his duty as the chairman of the Housing and Urban Development Coordinating Council.

“He will be in the Visayas next week putting all his efforts into the task of housing given to him by the President,” Remulla added.

Binay’s spokesperson also said that seeking the truth on the graft and corruption allegations lodged against the vice president now rests on the Office of the Ombudsman.

The vice president said that he backed out from the debate because he does not want to appear “opportunistic and oppressive.”

Binay added that his decision to withdraw from the debate is final.

Meanwhile, Trillanes slammed Binay’s decision to back out saying that it destroyed “any credibility left of him.”

Binay challenged Trillanes to a debate to air his side on the allegations of graft and corruption hurled against him.