Navy: No politics involved in Binay visit to Philippine Marines 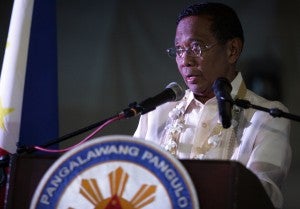 MANILA, Philippines – The Philippine Navy on Tuesday downplayed any political conundrums that the visit of Vice President Jejomar Binay to Fort Bonifacio may cause, saying that it was a simple birthday celebration.

Binay joined the routine physical exercises of the Philippine Marines Tuesday morning but it was not one of the big news of the day. It was his announcement there that he backed out of the debate between him and Senator Antonio Trillanes, which was scheduled for November 27.

“As far as the Navy is concerned, there is no shade of politics involved in his visit,” Colonel Edgard Arevalo, Philippine Navy spokesman, said.

Binay celebrated his 72nd birthday with a typical boodle fight with pork adobo, pansit and vegetables right after participating in the Marines’ morning exercise.

He arrived at around 7 am, went on with the budol fight at around 9 am and left the camp at around 9:30 a.m.

“He (Binay) said that he is a proud member of the Marines, he chose the Marines because they are warriors,” Belonio said.

Belonio added that Binay usually celebrates his birthdays with the servicemen of the branches of the Armed Forces of the Philippines.

Binay also took the opportunity to celebrate with the Marines on their 64th anniversary, which the corps commemorated on November 2.

“We remain an apolitical entity, we don’t side with anybody,” Belonio said. “It’s purely a celebration of he’s (Binay’s) birthday?’

Palace says it respects Binay decision to back out of debate