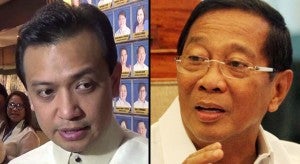 MANILA, Philippines—Vice President Jejomar Binay has backed out from his scheduled public debate with Senator Antonio Trillanes IV, saying he does not want to appear “oppressive and opportunistic.”

Binay made the announcement during his 72nd birthday celebration at the Philippine Marines headquarters in Fort Bonifacio, Taguig.

Binay explained that he doesn’t want to look like he is taking advantage of Trillanes, who is not a lawyer unlike him.

(The reason why I am withdrawing is I have heard comments that I am already a good and experienced debater that comes with my being a lawyer. He has also been saying things as if they were already confirmed. I don’t want to appear oppressive and opportunistic, so I am backing out.)

Binay has repeatedly declined the Senate invitation to appear before the Blue Ribbon subcommittee hearing corruption allegations against him.

The vice president, however, challenged Trillanes to a public debate so he could air his side.

The public debate between the two officials was scheduled by the Kapisanan ng mga Brodkaster ng Pilipinas (KBP) for November 27.

Public debate with Binay, a ‘no-win situation’ for Trillanes