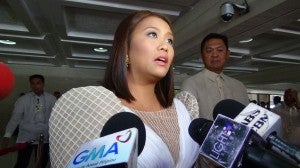 MANILA, Philippines — An “answered  prayer” and a “welcome  relief” were how Senator Nancy Binay described her father’s decision to withdraw from the scheduled public debate with Senator Antonio Trillanes IV.

“In the light of early attempts to set the stage for the upcoming event as unfavorably biased for Vice President Jejomar Binay, we respect the Vice President’s decision to beg off from the scheduled debate,” the senator said in a statement on Tuesday.

“This is an answered prayer and a welcome relief for the family, although we expect that our detractors will continue to gloat on the situation,” she said.

“From here, we shall move forward and the Vice President will continue to serve the Filipino people in the responsibilities entrusted to him, unencumbered by partisan attacks,” Senator Binay added.

The debate between Binay and Trillanes was scheduled on November 27 but the vice president decided to back out, saying he does not want to “oppressive and opportunistic.”

Instead of facing the Senate, Vice President Binay chose to address the allegations being hurled at him in the public and dared Trillanes to a public debate, which the senator immediately accepted.

It was Trillanes who initiated the Senate investigation into the allegedly anomalous construction of the Makati City Hall 2 parking building involving Binay but the inquiry has expanded to other irregularities allegedly committed when the vice president was still mayor of Makati City.