We’ll survive, with or without President Aquino—Yolanda survivors 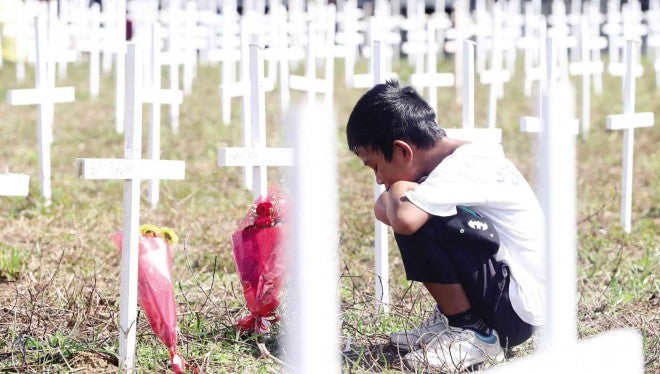 TACLOBAN CITY, Philippines—They have kept the faith. And they intend to keep it, with or without President Benigno Aquino III.

Survivors of the most violent typhoon to ever make landfall did not hide their anger and disappointment over the President’s decision to skip this city during his whirlwind visit on Friday to the areas devastated by Supertyphoon “Yolanda” in Eastern Visayas.

“We survived Yolanda. We can also survive without P-Noy,” said Corazon Alboro, 48.

With other survivors, Alboro went to City Hall on Saturday to join the activities that the local government had lined up to commemorate the first anniversary of the deadliest disaster to hit the country in recent history.

She also went to look for the names of her still missing relatives on the list of Taclobanons who perished and went missing during Yolanda’s onslaught.

The names of the dead and the missing were printed on large memorial tarpaulins that hung beside banners on which were written the words “Thank You” in front of City Hall.

Thousands of residents who survived the wrath of Yolanda (international name: Haiyan) attended Masses in churches and other places of worship throughout the city as they tearfully remembered the day the monstrous storm surges swallowed their communities.

They also brought flowers and lit candles at several mass graves where people who died in the disaster were buried.

“We thank God for saving us. We also asked Him to help us find my brother and his daughter who remain missing up to this day,” said Maricel Alamora, 60, as she came out of the 6 a.m. Mass she attended at Sto. Niño Parish in Barangay 25-A.

We will rise where we fell

Mr. Aquino should have set politics aside in dealing with the rehabilitation of the typhoon-stricken villages, said Mark Lester Morano, a father of two.

“We will rise where we have fallen. We were able to live without P-Noy. We will live without him,” Morano said.

Morano said he, his wife and their two young children aged 2 and 8 narrowly cheated death when their family’s house in Barangay 82-C, San Jose district, was swept away by walls of seawater whipped up by Yolanda’s violent winds.

He said he was upset that the man he and his family helped win the presidency in 2010 had snubbed the city regarded as ground zero for the deadly cyclone.

“I looked up to him as my idol. But now, I regret voting for him. What he did to us was a disrespect to the memory of his father, who was known for his love for ordinary Filipinos like us,” Morano said, referring to the President’s father and namesake, martyred opposition leader Sen. Benigno Aquino Jr.

Like Morano, Alboro said she also voted for Mr. Aquino as she thought she saw in him the qualities of a good leader.

“Maybe he chose to forget us because of politics. That’s wrong. Good leaders don’t do that,” she lamented.

Fisherman Cecilio Nablo, of Barangay 25, carefully placed a white flag on his small fishing boat before he set out to sea at Cancabato Bay just in front of City Hall.

When storm surges washed away coastal communities in the city, bloated bodies of typhoon victims were fished out of the bay.

Written on the flag were the words, “Brgy. 25. Ride to survive. Commemoration all the victims of Typhoon Haiyan. Nov. 8, 2014.”

Nablo said he himself wrote the message. “Tuloy lang ang buhay (Life goes on),” he said.

“We will not abandon you. We will be with you all the way,” Roxas told typhoon survivors in Ormoc.

Lacson said P413 million had been earmarked for various rehabilitation projects in Ormoc, including P59 million for the repair of its damaged civic and sports center.

Roxas congratulated the local officials and residents of Ormoc for the close coordination and cooperation they showed in rebuilding their communities, saying their response to Yolanda was worth emulating.

He said the Department of the Interior and Local Government would adopt their “best practices” in developing a manual for disaster preparedness.

In Tanauan, an agricultural town located a few kilometers from Tacloban, the Cabinet secretaries led the wreath-laying ceremony at the Yolanda memorial wall.

“The highest form of respect we can give to those who perished is our pledge of cooperation to help one another get back on their feet,” Roxas said in his speech.

Etched on the memorial wall were the names of 1,380 victims who, Roxas said, “represented the hopes and dreams that could have been.”

“Because we have many partners, rest assured that we are focused on our job and that no one will be forgotten,” he said.

‘Yolanda’ survivors grieve for kin whose bodies were never found