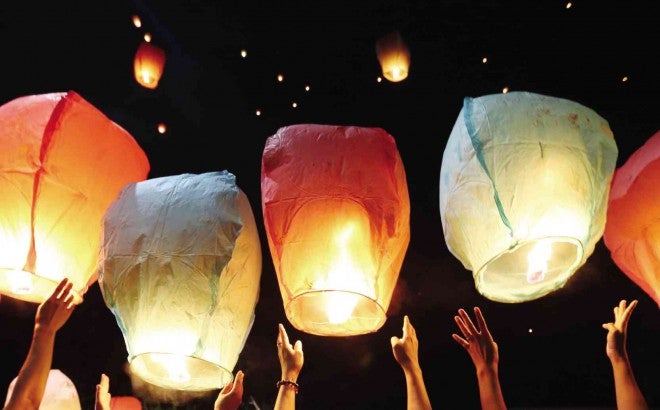 RITES OF REMEMBRANCE On Friday, the eve of the 1st anniversary of “Yolanda,” the employees of the Leyte Park Hotel in Tacloban City on behalf of all the victims of the brutalizing supertyphoon, release lanterns with prayers that misfortune will take flight and light will show them the path toward the renewal of their lives. RAFFY LERMA

TACLOBAN CITY, Philippines—Survivors of Supertyphoon “Yolanda” (international name: Haiyan) on Saturday shed tears in celebration of life as they descended on mass graves to mark one year since the storm took away their loved ones and devastated much of central Philippines.

But even as they thanked God for surviving the strongest typhoon ever to hit land, at least 36,800 survivors protested in Tacloban City and in Cebu, Iloilo, Capiz and Aklan provinces to decry the slow pace of the rebuilding of their ravaged communities and the lack of assistance from the national government.

“I woke up early just like on any other day to earn a living. I still shiver when I remember what happened on this day last year. But we are thankful that we are still here, alive,” said Milagros Belonia, 54, a survivor in Botongon village in Estancia town, Iloilo.

In Tacloban City, relatives of the 2,273 people who perished in the storm offered prayers and lighted candles at a mass grave at Holy Cross Memorial Gardens in Tigbao village.

Virgilio Omega, 58, and his wife, Erlinda, 58, went to the mass grave although their daughter, Fe, remained missing.

“We know that the body of our daughter has yet to be found. We just console ourselves by thinking that she could be among those buried here,” Erlinda Omega said.

The couple traveled from their native city of Ormoc, in Leyte province, to offer prayers and light candles at one of the wooden crosses put up by the city government at the mass grave.

Alberto Rabas, 25, also returned to Tacloban from Ozamiz City, where he works, to light candles and offer prayers at the mass grave.

His parents Antonio, 58, and Treponia, 56, are among those who remain missing. Believing that they could be among those buried in the mass grave, he wrote their names with a felt-tipped pen on two wooden crosses there.

Yolanda claimed more than 6,000 lives as it swept through central Philippines, with its 300-kilometer-per-hour winds and 7-meter storm surges flattening entire communities, on Nov. 8 last year.

More than 14.5 million people were affected by the storm in nine regions and 44 provinces. More than 4 million still remain homeless.

The Catholic Bishops’ Conference of the Philippines declared Saturday a national day of prayer, and church bells across the nation rang at 6 p.m. to remember those who died or suffered in the storm.

In Palo, people woke up to the mournful tolling of bells as the solemn remembrance of the 1,600 residents of the town who died in the storm began.

Just like a year ago, before the storm struck, Palo Archbishop John Du led the aurora—early morning procession—around the town, with the parishioners’ faces faintly illuminated by the lighted candles they carried.

Residents of remote villages arrived as early as 4 a.m. at the Palo Cathedral to join the relatives of those who died in the storm at the Yolanda Memorial, the first of three mass graves in the town where close to 200 victims were buried.

More than 2,000 people joined the memorial service and attended the Mass celebrated by Du.

After the Mass, Du blessed the new memorial as well as the grave markers with the names of those buried there.

Later in the day, the coastal villages of Candahug, Salvacion, Cogon and San Joaquin—where most of the victims lived—went into a celebratory mood as the relatives of those who died held feasts to mark the end of a novena commemorating the multiple death anniversaries.

As the day ended, the relatives tossed flowers to the sea and sent small, candle-laden boats sailing along the shores of the four villages and on Bangon River.

In Tacloban, Mayor Alfred Romualdez said 2,474 residents died in the storm, based on the number of death certificates issued by the city civil registry.

At least 2,273 were buried in the mass grave at Holy Cross Memorial Cemetery in Diit village. The rest were buried by their relatives in plots in front of their houses.

Romualdez said some of the dead were foreigners whose nationalities could not be determined.

The Regional Disaster Risk Reduction Management Council of Eastern Visayas has placed the death toll in the region at more than 6,000.

“Together we can transform our pain and suffering into strength, motivation and inspiration for a better tomorrow; to honor and give meaning to the thousands of lives lost,” he said in a speech at the ceremony.

Romualdez also expressed his gratitude to the international humanitarian groups that assisted the people of Tacloban during the crisis.

He said that the “overwhelming charity” coming from those groups helped the recovery efforts in Tacloban.

At the end of the ceremony, the survivors released 180 white balloons and 750 doves.

The buildup to the anniversary had focused renewed attention on the pace of the reconstruction effort, with President Aquino’s administration criticized by many for a perceived lack of urgency.

Roughly 1 million people need to be moved away from coastal areas that are deemed vulnerable to storm surges, according to a P160-billion master plan for rebuilding the typhoon zones.

But the plan has already fallen behind schedule, delayed by problems in finding new land that is safe and suitable for 205,000 new homes.

In a speech at the hard-hit town of Guiuan on Friday, President Aquino defended the pace of the reconstruction program, saying he was determined to ensure it was carried out correctly rather than rushing.

“Curse me, criticize me but I believe I must do the right thing,” Mr. Aquino said.

“I am impatient like everyone else but I have to stress that we can’t rebuild haphazardly. We have to build back better … let’s get it right the first time and the benefits should be permanent,” he said.

While millions endure Yolanda-exacerbated poverty, there has been some remarkable progress from a year ago as international aid agencies have pumped hundreds of millions of dollars into the region.

Some of the big successes of the campaign have been the restoration of electricity within a few months, quick replanting of crops, and sanitation programs that prevented major outbreaks of killer diseases.

Local governments also held commemorations in Iloilo, Antique, Capiz, Aklan and Cebu and thanked local and foreign organizations, humanitarian and relief groups and private donors for the assistance they received from them.

Mayor Rene Cordero of Estancia said 80 percent of the survivors had recovered but many needed permanent houses and means of livelihood.

But many survivors said their recovery and rehabilitation would be faster if the national government would give them promised assistance.

In Tacloban, more than 20,000 survivors marched from the Tacloban City Convention Center to the city center, where they denounced President Aquino for what they claimed was his lack of support for them.

Efleda Bautista, chair of the People Surge, a group of Yolanda survivors, said the lack of assistance from the government showed Mr. Aquino’s insensitivity to their plight.

“Let us rise as one to give justice for those who died during Yolanda and oust Aquino,” Bautista said.

In Capiz, about 10,000 survivors from 11 towns and Roxas City led by the Buylog sa Pagbangon Capiznon and Bagong Alyansang Makabayan converged at the Roxas City Bandstand, where a rally and protest concert were held.

“We have never been complacent to build from the ruins left by the supertyphoon. But our hearts bleed to see and feel the government’s insensitivity in rebuilding our lives,” said Monica Cabantug, Buylog Capiz coordinator.

In Iloilo, about 4,000 survivors led by Task Force Buliganay and Bayan Muna joined a rally in Estancia, one of the hard-hit towns in Western Visayas and was also devastated by a massive oil spill after a power barge slammed into its shores at the height of the typhoon.

In the capital town of Kalibo in Aklan, about 2,500 survivors converged at the Kalibo Pastrana Park for one-year commemoration rites.

The survivors floated on the park lagoon miniature rafts carrying their demands.

On Bantayan Island in Cebu, about 300 survivors held a rally and expressed their frustration at the delay in the release of emergency shelter assistance.

According to the provincial government, 9,969 survivors have yet to receive P30,000 for rebuilding their destroyed houses and 7,681 others are still waiting for P10,000 for the repair of their damaged houses.

“Where is the calamity fund?” some of placards carried by the survivors read. With reports from Danny Petilla, AFP

Aquino only listens to ‘voices in his head’—‘Yolanda’ survivors

Yolanda survivors: Each day a new day, for better or worse