‘Aquino made us wait for 3 hours, then snubbed us,’ says Yolanda survivors | Inquirer News 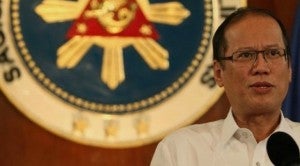 TACLOBAN CITY, Philippines — They waited for more than three hours at the gate of Malacañang but were never given even a minute of the President’s time.

To add insult to injury, they said, President Benigno Aquino III did not only snub Sister Edita Eslopor, chairperson of People Surge, and her three members but also chose to answer their petition through the media.

She said they would ask their congressmen in Eastern Visayas to deliver a privilege speech and expose the plight of the thousands of people still reeling from the devastation caused by Super Typhoon “Yolanda” (Haiyan) on Nov. 8.

If the government would continue to ignore them, the group would hold series of demonstrations, she added.

Bautista said that despite the huge financial assistance from various countries and international organizations, the victims could hardly feel any help from the national government.

People Surge is composed of peasants, fisherfolk, activists, students, academe and Church-based organizations based in the Eastern Visayas.

It has asked the government to provide each victim P40,000 in cash to repair their houses and help them meet other financial difficulties.

It also asked that the no-build zone policy be scrapped because it would displace the fishermen. Under the policy, residents are not allowed to build any structure 40 meters from the shoreline.

Last Monday, Sister Eslopor and three members of her group went to Malacañang to hand in their petition signed by 17,000 people displaced by ‘’Yolanda.’’

Bautista said Eslopor was stopped at the Palace’s Gate 7.

“(They) were told … to wait for two hours,” Bautista told the Philippine Daily Inquirer.

The group waited but two hours passed and no one came back to see them. After more than three hours, the group left.

Two days later, they learned that the President had answered their petition through the  media and that he was against it.

Aquino said the government would need at least P56 billion if the 1.4 million victims of ‘’Yolanda’’ were to be given P40,000 each.

Bautista called Aquino “callous” to the plight of the typhoon victims.

In Eastern Visayas, more than 280,000 families were hit by Yolanda, according to the Department of Social Welfare and Development (DWSD).