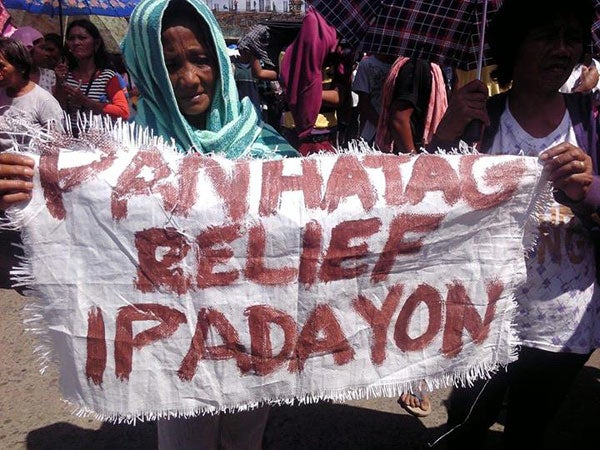 TACLOBAN CITY, Philippines—At least 12,000 people staged a rally in the busy streets of Rizal and Zamora here to ask President Benigno Aquino to give the victims of Super Typhoon Yolanda P40,000 each in financial assistance so they could rebuild their lives.

Sister Editha Eslopor, chairperson of the Alliance People’s Surge, said P40,000 was a small amount to be given to the poor, especially those living in remote areas in Leyte and Samar considering that the government received billions of pesos in financial aid from various international and local groups.

The People’s Surge is a coalition of about 20 associations representing various sectors.

According to Eslopor, the P40,000 was even “barely enough” to rebuild a house for a family displaced by Yolanda (Haiyan). She pointed out that most of the victims were poor.

She warned of more protest actions if their demand was not met in light of the “very slow” distribution of relief goods by the government.

“They say that we have received so much from various international humanitarian organizations and foreign governments. Where is this assistance? The people, particularly in the remote villages of Leyte and Samar are now hungry. They barely received this assistance from our government,” she said.

Letecia Cabias, 53, a resident of MacArthur town in Leyte and one of the demonstrators at the rally that ended at 1 p.m., said their demand was justifiable.

She explained that they were poor and their only source of income, a farm, and their small house had been destroyed by the typhoon.

Nastashia Delmonte, 35, a resident of Barangay 110 here, explained that they didn’t want to rely on the food items being distributed by the national government.

But Social Welfare Secretary Corazon Soliman thumbed down the proposal to distribute  P40,000 to each to the typhoon victims.

She said there was no guarantee that the typhoon victims would indeed use the money to rebuild their lives.

She also said that this could set a bad precedent if another typhoon or disaster hit the country.