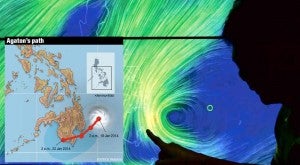 DAVAO CITY, Philippines—The damage caused by the recent, long-lasting low pressure area that briefly intensified into a low-level cyclone named “Agaton” was far worse than the destruction left by Typhoon Pablo in December 2012, according to Davao Oriental Governor Corazon Malanyaon.

Malanyaon said one point of comparison was the volume of rain that fell on the province.

“In Typhoon Pablo, the sun shone two days after it struck, but in the LPA and TD Agaton, the rains continued for many days, resulting in huge damage, with debris, muddy roads, boulders everywhere, collapsed bridges, and mounds of driftwood and felled timber swept by raging waters hitting the province,” she said.

Malanyaon said even to this day, the effects of this month’s low pressure area and the short-lived Tropical Depression Agaton were still being felt all over the province.

“If there were only two major bridges damaged by Typhoon Pablo, the LPA and TD Agaton took five bridges to ruins,” Malanyaon said.

Floods and landslides generated by the low pressure area isolated a total of 183 villages in the province, she said. Twelve people were killed in Davao Oriental alone.

Heavy rains generated by the low pressure area began battering Mindanao and parts of the Visayas starting on Jan. 10 and continued even after the weather disturbance completely dissipated on Jan. 22.

Malanyaon said the province has already sought the assistance of the national government with respect to clearing operations, as massive debris was hampering the distribution of relief goods in farflung places.

The province also needed immediate assistance in the repair of bridges damaged or destroyed by the floods and landslides, she said.

“We don’t have enough equipment to clear the roads in all the affected barangays which are full of mud, debris, and felled trees,” Malanyaon said.

In Compostela town in Compostela Valley, US Ambassador Philip Goldberg on Friday led  turnover ceremonies for newly built market buildings funded by the United States to replace a marketplace that was demolished by Typhoon Pablo.

Goldberg said the ceremonial turnover was a means of celebrating the opening of the  market built to restore and rebuild livelihoods.

“It’s now been over a year after Typhoon Pablo struck and wrought so much destruction. While we’re saddened by the devastation suffered by the people of Compostela Valley and Davao Oriental, we applaud your determination to rebuild, to bounce back, to persevere. I understood that economic activity has been restored here in your community,” Goldberg told officials and residents.

Governor Arturo Uy said he was sincerely thankful to the US and its people for helping Compostela  Valley by funding various projects even before ‘Pablo’ struck.